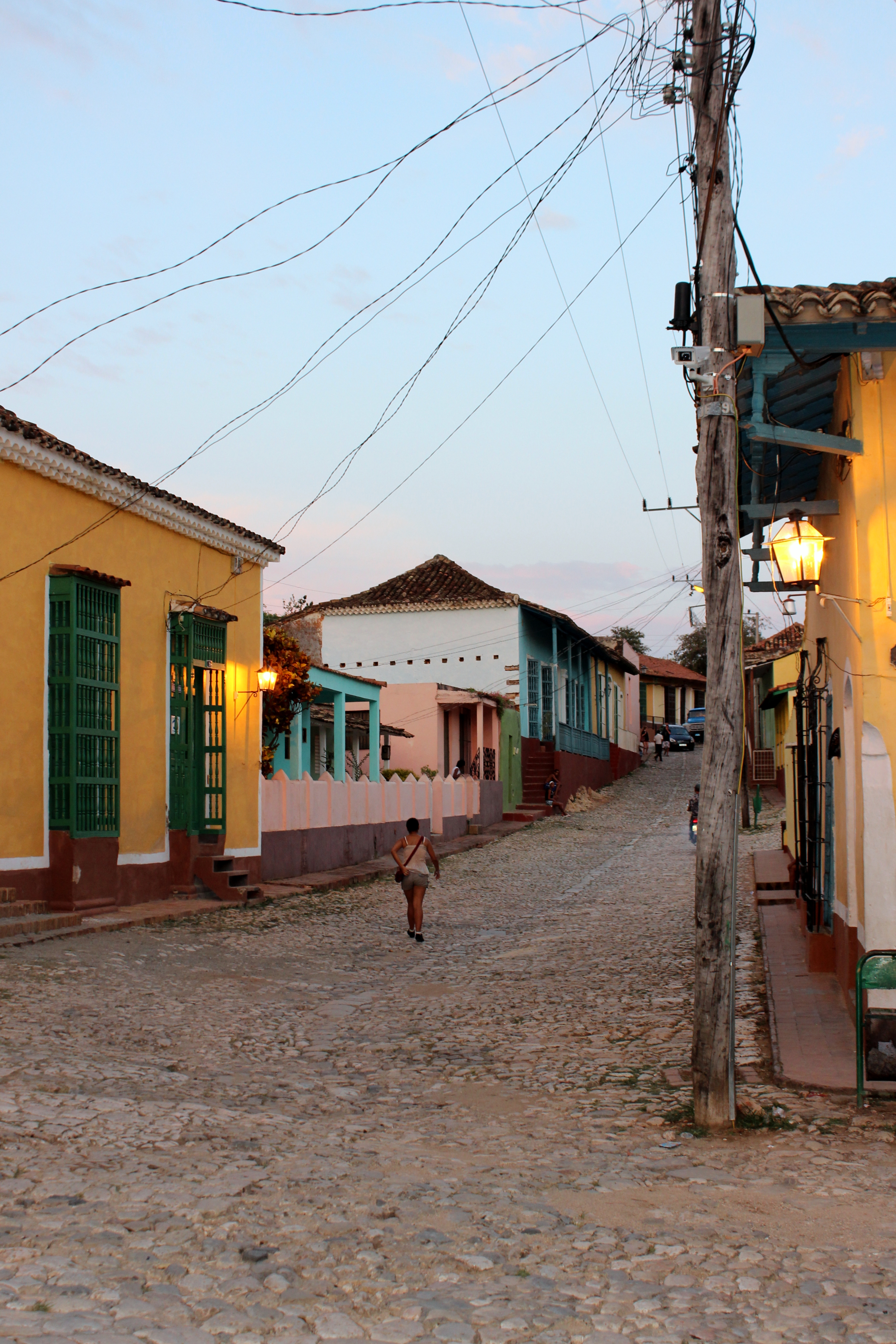 I had booked several nights at Casa Magaly, a private residence that had been turned into a Cuban bed-and-breakfast or ‘Air BnB’ of sorts. Only four blocks away from the Plaza Mayor or main plaza in central Trinidad, the home was conveniently located for exploring the five hundred year old World Heritage site. The two-story concrete structure had a salmon-painted, but otherwise plain façade.

Magaly, the proprietor, and her son stood in their doorway to greet me. 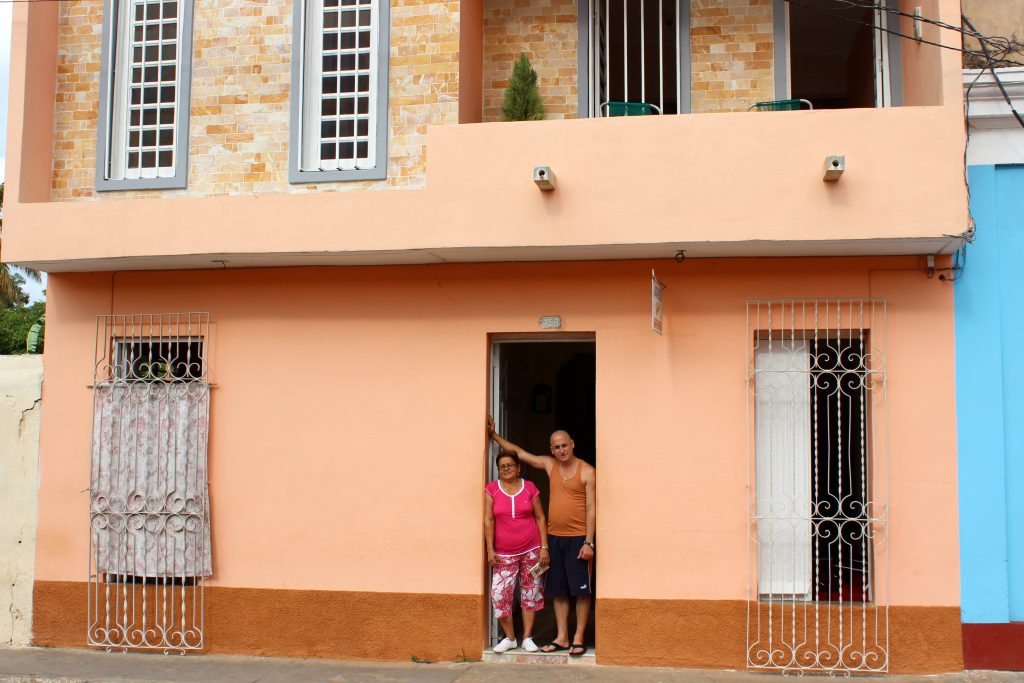 Casa Magaly is a two-story casa particular run by Magaly and her son.

I found this casa particular (Spanish for “private home”) on a Cuban website for tourists seeking rental cars and lodging.

The only lodging travelers could find in Cuba before was entirely state-owned and operated. In 1997, the government announced that Cuban families could register their home as a privately owned business and rent out rooms to foreigners. Allowing the limited legalization of privately owned business was one of the first examples of the Castro government loosening rules on private enterprise in socialist Cuba.

Usually a casa will cost around $20 CUC which is about $20 U.S. (since the Cuban tourist CUC currency is pegged to the U.S. dollar). Today, booking sites such as Booking.com and Airbnb offer lodging listings for Cuba.

Wrung out from my drive to Trinidad, I chose to eat my first dinner in Trinidad at Magaly’s house. She cooked my meal, which was fresh, plentiful, and simple—fried local fish, arroz con gris (rice cooked with black beans), fried plantains, and salad. 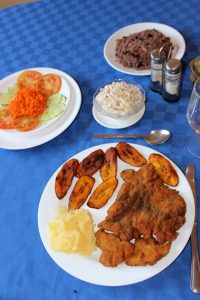 My first dinner at Casa Magaly.

As we chatted, I discovered that Magaly used to be a telephone operator for the government (there is no private telephone company in Cuba).

Magaly was warm, gracious, efficient, and somewhat guarded. Not wanting to be inquisitive to the point of rudeness, I stopped asking questions when I saw her stiffen.

My unasked question hung in the air between us.

“How on earth could you afford to build this new house as a retired telephone operator in Cuba?”

As Magaly took me on a tour of her home, I saw that the first floor featured a small entry area that acted as reception for house guests and a tiny, but well laid out working kitchen. The family lived in hidden spaces carved out from the first floor, hence the lack of an eat-in kitchen or spacious living room. The guest rooms, guest common areas, and places for guest dining were all on the second floor.

“As we get more funds, we will finish building the house,” Magaly said, as she showed me the unfinished rooftop patio. “You can come up here, but it’s not done yet, so there’s no place to sit at the moment.”

After dinner, I strolled through the immediate neighborhood as dusk slowly awakened the town. Many doors and windows were still closed as I started out, to keep the hottest air of the day from coming inside the houses.

The first thing I noticed is how everyone walked in the middle of Trinidad’s cobblestone streets. The only car I saw all evening was my rental car, now parked across from Magaly’s house in front of a neighbor’s house. 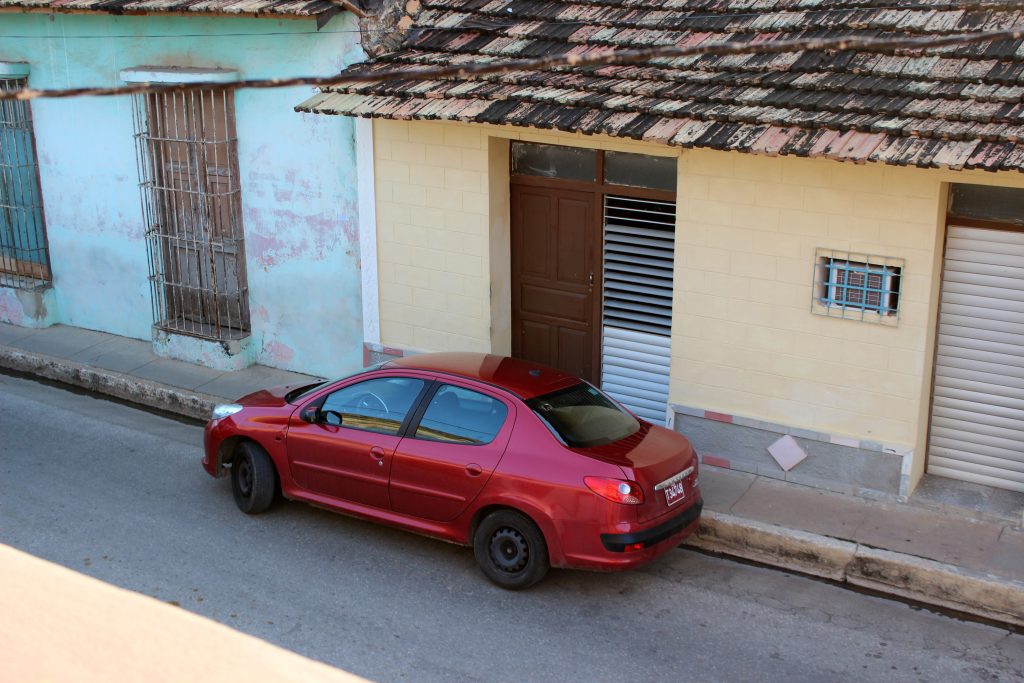 My rented car is parked across street from Casa Magaly for safe keeping.

“You’ll need to pay $2 a day for him to guard your car,” Magaly told me, as she pointed to where I needed to park my car.

Sure enough, after I had showered and dined, I noticed the closed up home when I had arrived was now open to the evening breezes, the old man sitting in a rocking chair watching an ancient T.V. set in his living room.

His chair was next to the open door, which had a direct view of my dusty parked sedan.

I heard only the sound of horses’ hooves clop clopping on the cobblestones as I started walking. 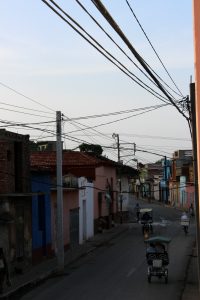 As night falls in Trinidad, the only traffic on the street in front of Casa Magaly is from pedicabs.

The homes on and around the Plaza Mayor, the town’s central square, have been for the most part, lovingly maintained. Few new buildings have been built in the town’s historic center since the collapse of Trinidad’s sugar industry in the mid-19th century. Walking the streets near the Plaza Mayor was a step back in time to Trinidad’s heyday as a bustling colonial center.

Once it was fully dark and cooler, Trinidad opened its old homes to passers by in the streets and I was able to see easily into people’s homes. Old people sat in living room chairs, freshly showered, wet hair neatly combed.

Almost every older home had marvelous Cuban tile* patterned floors, weathered from so many years but still dazzling. There were a few homes with midcentury furniture in various stages of wear and tear, but the majority had much older furniture and architecture. Here and there I spotted baroque wooden carved armoires, tables, and other wooden handmade pieces kept in families for generations standing guard in otherwise sparse rooms.

Trinidad at dusk as seen through a wrought iron fence surrounding the Plaza Mayor. 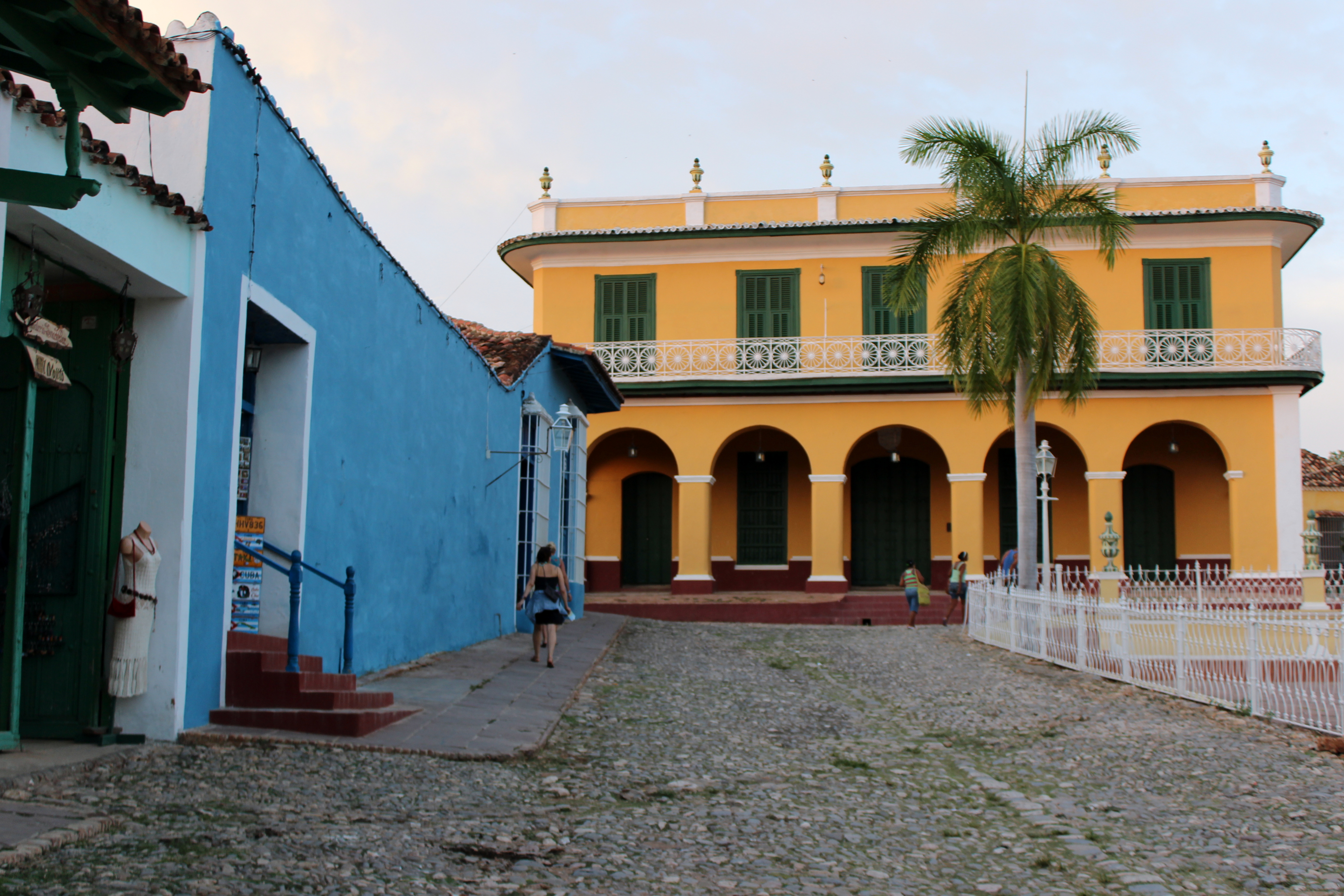 Walking near the Plaza Mayor in Trinidad, Cuba. 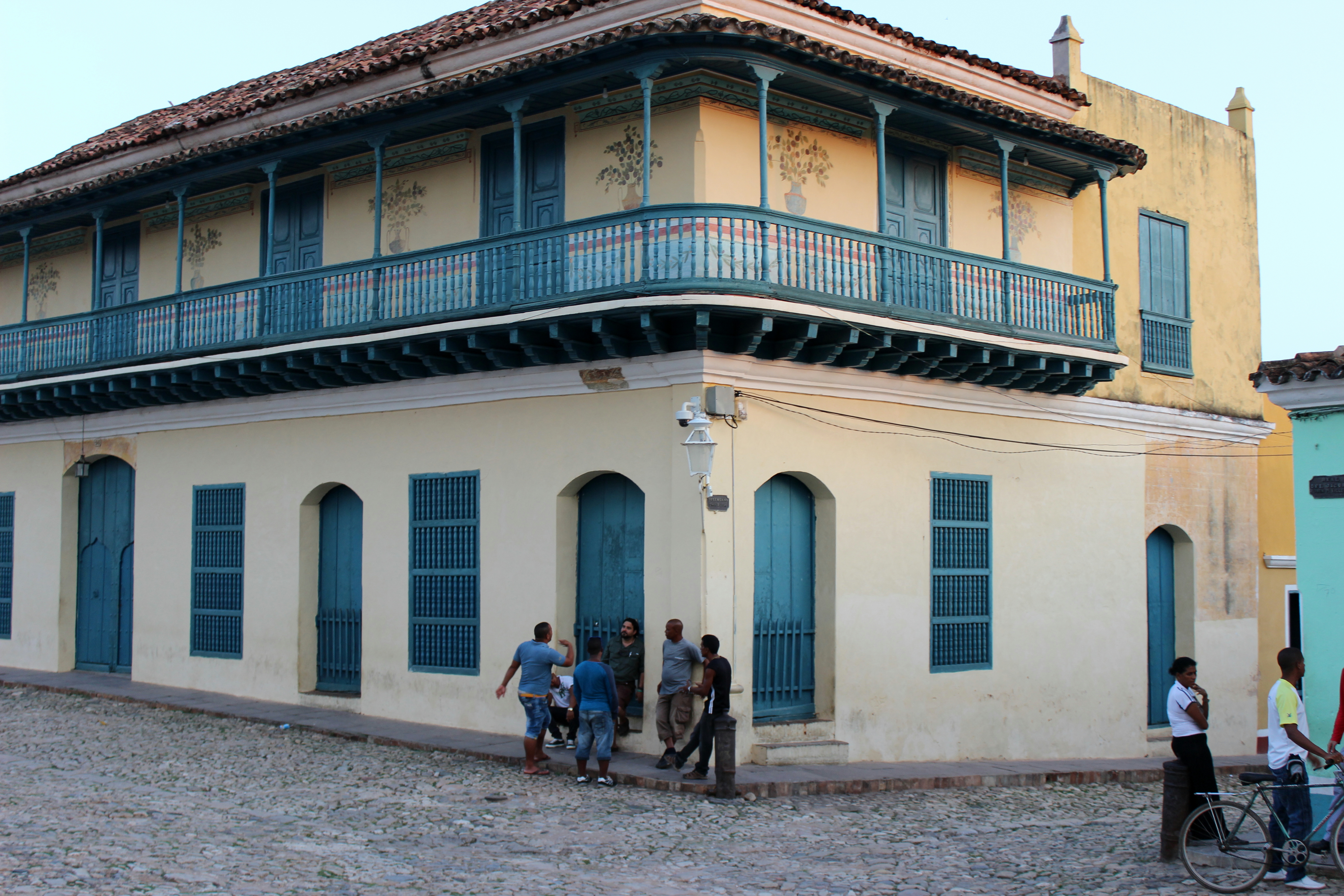 Men hang out on a street corner in Trinidad, Cuba.

Alas, I could not bring myself to take a single photograph. So many of the abuelos wore only pants and an undershirt, the abuelas wearing their thin nightgown-looking house dresses. I only glanced inside as I passed many colonial-era homes on my return to Magaly’s modern concrete marvel. Even the children playing in the Plaza Mayor were enjoying the early evening as older relatives chatted. 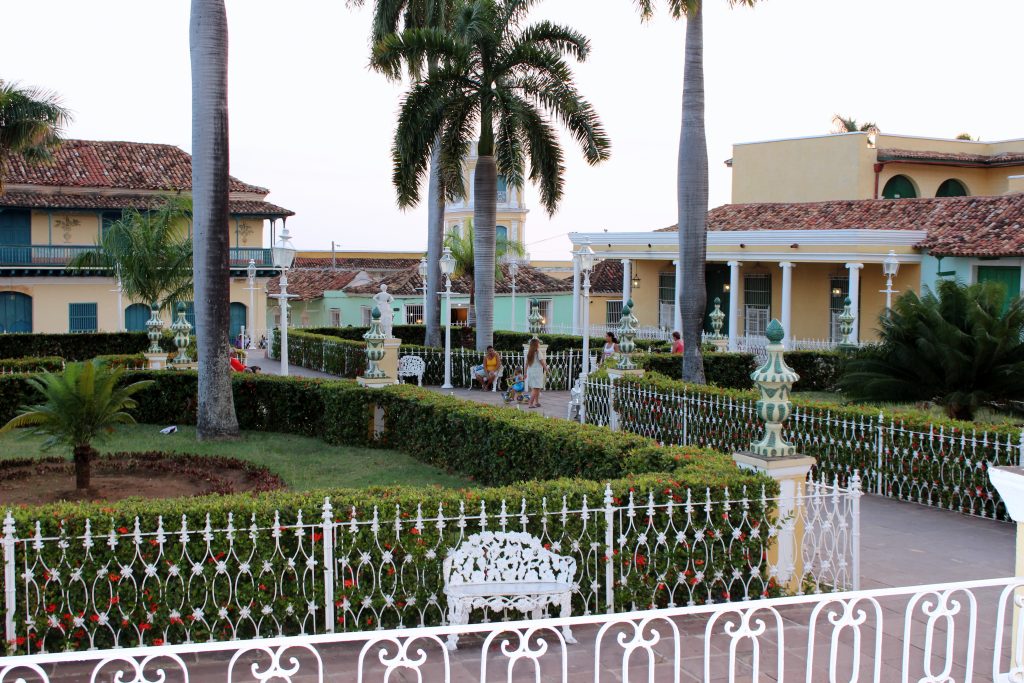 My first night in Trinidad I slept with the wall air conditioning unit on full blast, used the clean, fully stocked bathroom one last time, and counted my blessings. Tomorrow would be a busy day exploring Trinidad.

Featured image is of a woman walking alone at dusk in Trinidad, Cuba, taken by Iris Gonzalez.

*There is a need for a definitive history and photo book on Cuban tile, as there are few authoritative sources available online.