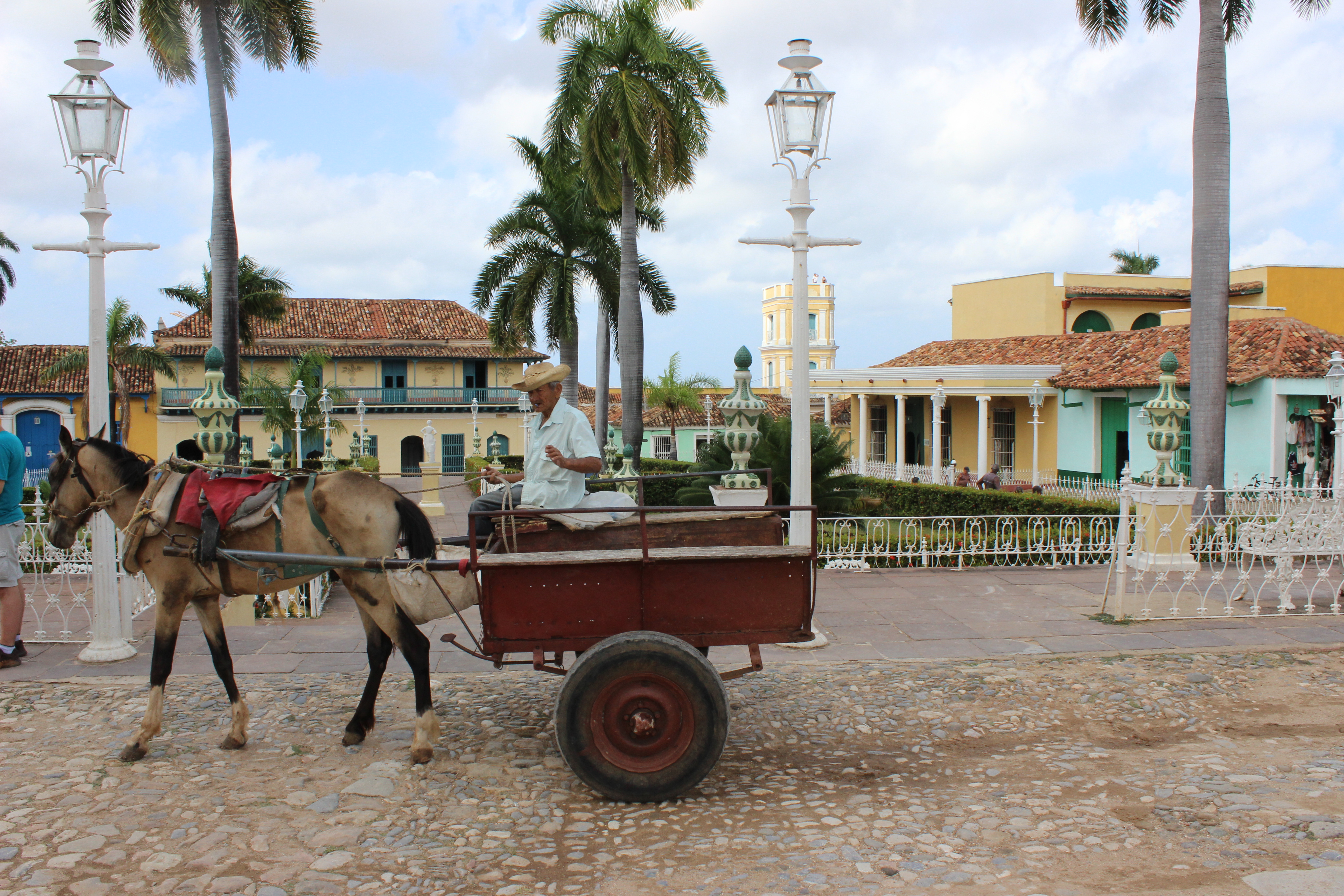 Waking up early, I listened carefully from my guest room which faced the street to the sounds of Trinidad waking up. I heard no traffic, only the slow clop-clopping of the horse’s hooves on the cobblestones. Farmers called out what they carried in their carts.

“Plantanos, plantanos,” one old man yelled, his voice trailing off as he headed to the edge of town. He had no takers for his bunches of plantains. 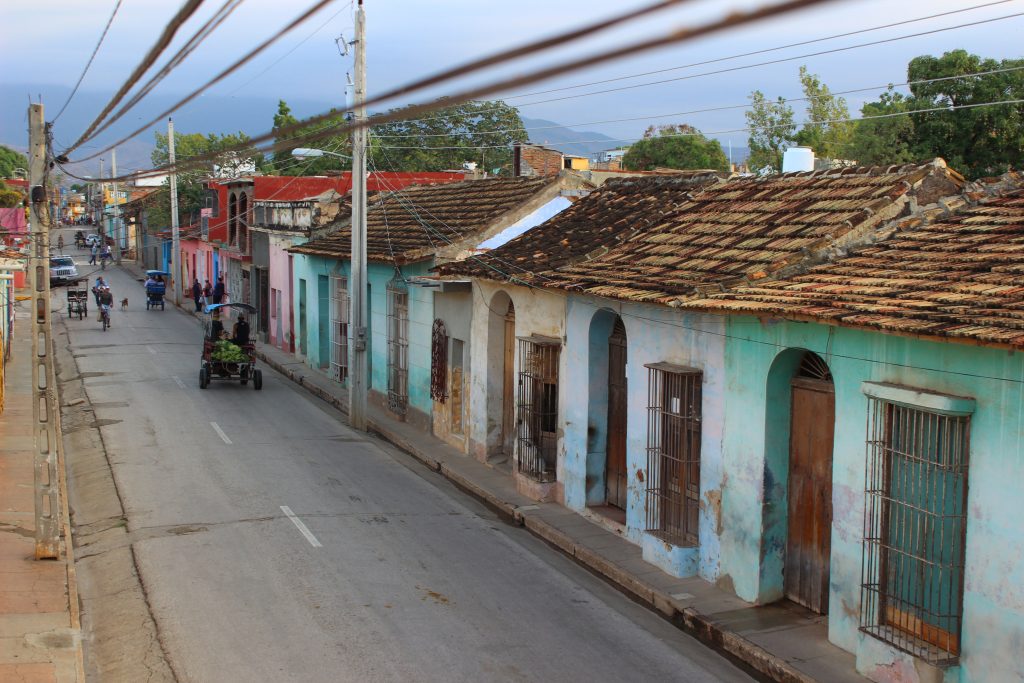 In Trinidad, early morning vendors call out what produce they have to sell.

Magaly prepared a lovely breakfast for my first full day in Trinidad. The variety of ripe papayas, watermelon, guavas, even pineapple made for a luxurious breakfast.

“We are lucky to have mangoes, papayas, and bananas grow so well here,” Magaly said. “They travel only a few kilometers to our doorstep.” 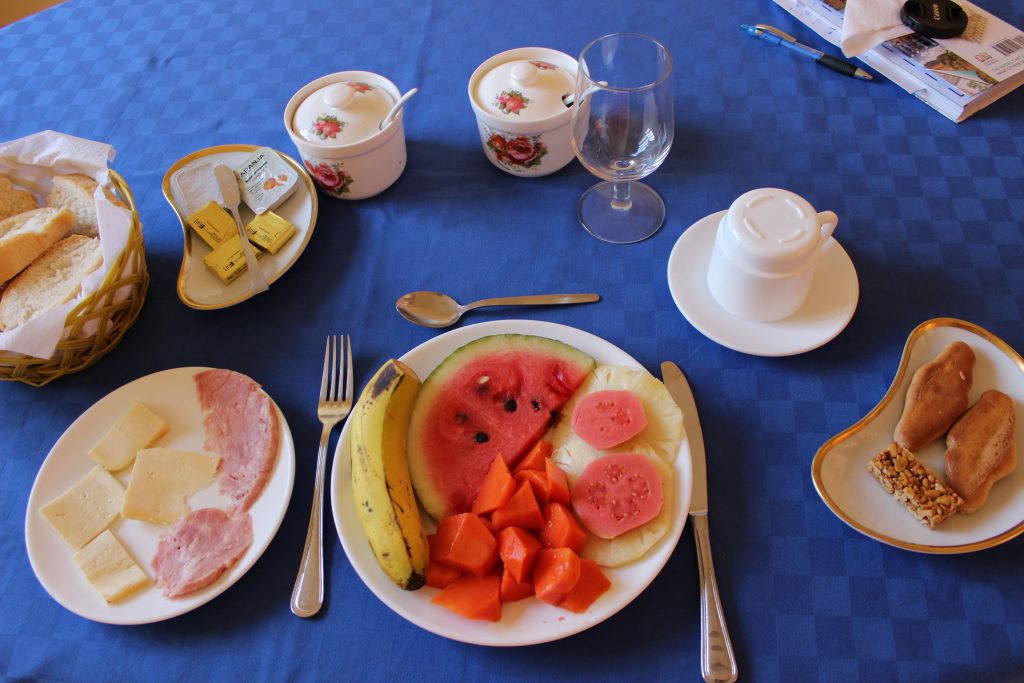 A breakfast at Trinidad’s Casa Magaly reveals the local bounty of tropical fruit.

The need for hyperlocal food sources was not a reflection of a farm-to-table movement taking hold in Cuba. It was out of sheer necessity.

Cuba imports more than two-thirds of its food. Even if Cuba could produce enough food to feed its entire population, getting it shipped domestically is a major challenge as fuel, trucks, and vans to ship produce are lacking. In a country with a centrally controlled economy that is poorly run, the food supply chain is broken in so many ways.

I tried and decided to leave most of the mystery meat from my breakfast. Let’s just say it made me miss how good Spam could be in a pinch. I saw little meat in Trinidad, but fresh fish and fruit seemed to be in ample supply, at least for tourists.

After breakfast I met the two other travelers staying at Casa Magaly—Wade and Camille, a young American couple. They live and work in a U.S. ski resort area and travel during the skiing offseason. This year they decided to backpack in Cuba and had arrived in Trinidad by bus. 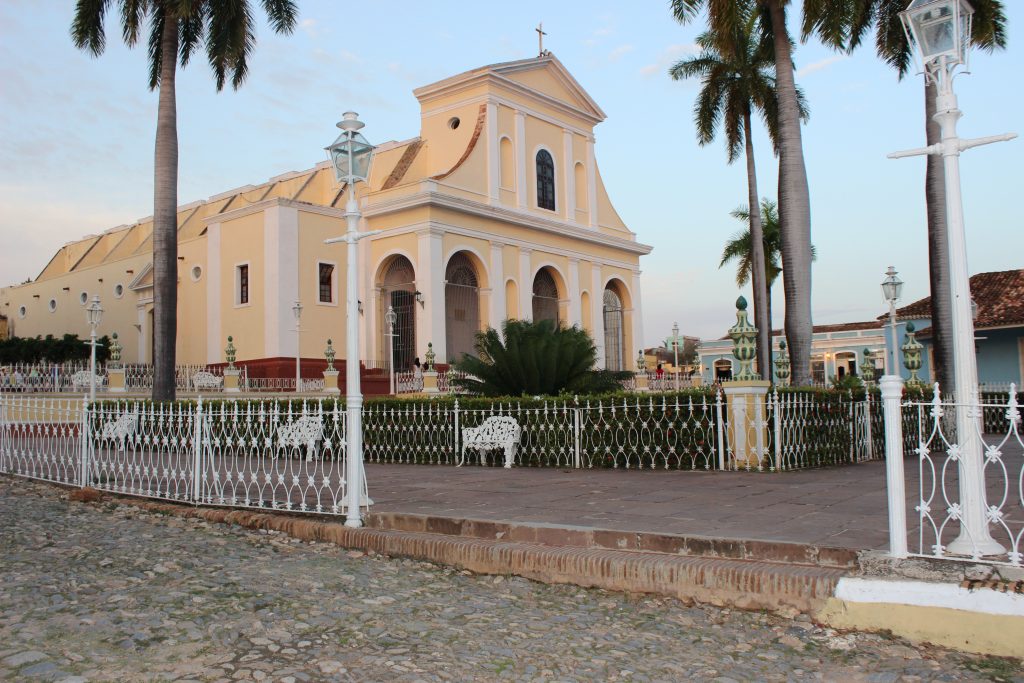 Like reactive elements, we decided to join forces and set out to explore the colonial town. Trinidad has quite a few museums. We peeked inside the National Museum of the Fight Against Bandits. The museum focuses on the counter revolutionaries who continued their defiance of the Castro regime in the nearby Escambray Mountains in the immediate years after General Batista had fled Cuba in 1959. Opened in 1984, the museum is housed in an old convent. Exhibits include a number of maps showing battles against the rebels and various military artifacts.

Trinidad’s main museum is its History Museum, housed in a grand Neoclassical mansion just off the Plaza Mayor. The home belonged to the Borrell family from 1827 to 1830 and serves as a showcase of how the rich elite used to live in colonial Cuba. The museum is divided in four rooms, the first one decorated as the mansion appeared in the 1800s. The other rooms have displays on local history, its sugar industry, and a weapons room featuring canyons used to protect the city from pirates.

The main reason to visit, however, is to enjoy the views from the highest point in Trindad. Climbing the mansion’s bell tower rewards the viewer with 360 degree panoramas from the foothills of the Escambray Mountains to Ancon beach and the ocean.

The path to those priceless views from the mansion’s belltower is via a series of rigged Jenga-like wooden stairs. Many of the steps had holes or rotted slats and there was no handrail. The final approach to the rooftop included a claustrophic spiral staircase plunged in darkness despite the noon hour and a final ladder so steep and tight one could not climb it while wearing a backpack of any kind.

The yellow church faces the Plaza Mayor while the Escambray Mountains can be seen in the distance.

The views and fresh air at the top were most welcome. Going back down required passing the first timers coming up, wearing incredulous looks on their faces. 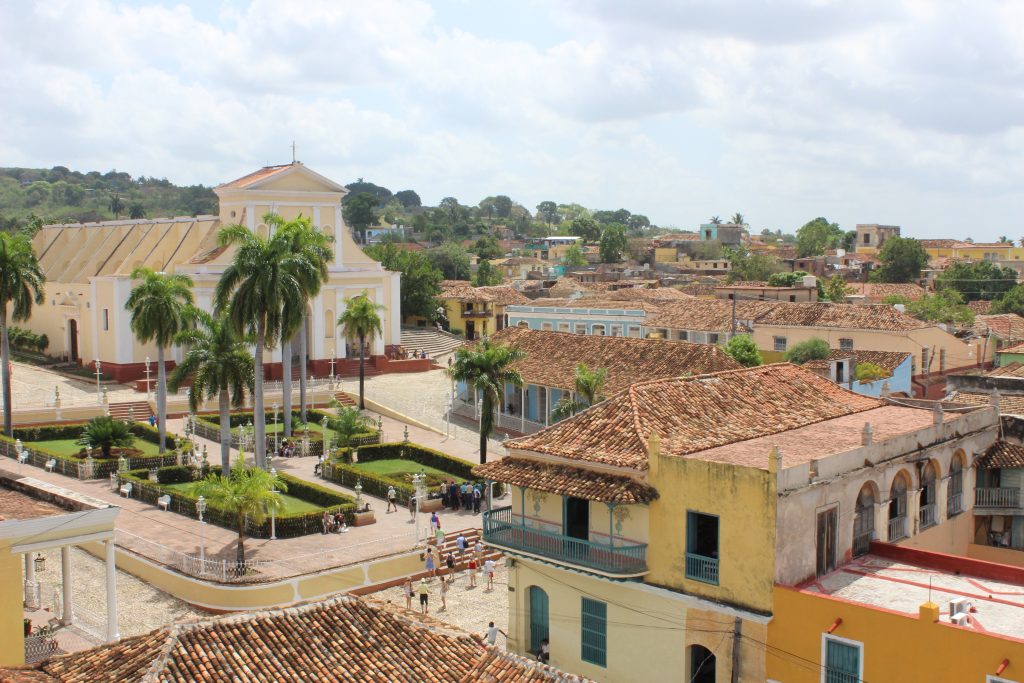 The view of the Plaza Mayor from the tower of the Trinidad History Museum.

What warning can you give? I kept quiet and shuffled past the innocent pilgrims. 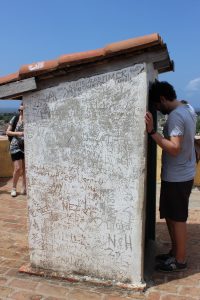 The final approach to access the tower is via a narrow ladder up a dark, steep enclosed shaft.

The tower climb is the most ADA adverse feature in historic architecture I’ve ever experienced.

The museum also provided me another personal worst. Their restroom is my second worst public bathroom ever visited.

A bathroom in the former Soviet Union—a long wait to use a stall with walls that only came up to my waist in which I squatted over a deep hellhole while I avoided the multiple “misses” and eye contact with Russians waiting in line—is still my No. 1 Worst Public Bathroom Experience.

The Trinidad, Cuba bathroom in the former mansion was in a stuffy former utility closet for the maids. As soon as I squeezed into the single stall, I started to sweat so badly the perspiration stung my eyes. The washroom attendant stood immediately outside the flimsy door, as did those who waited in line.

My bathroom fee paid for the attendant to pour a bucket of water into the toilet. There was no running water in the bathroom.

Having survived the Tower Climb of Death and obligatory Communist bathroom experience, we were ready for some lunch. And wipes, many, many antibacterial wipes.

Featured image is of a guajiro, or a rural man driving a horse drawn carriage past the Plaza Mayor in Trinidad, Cuba. Photo credit: Iris Gonzalez