Driving on the country road, I traced my way from the Autopista Nacional westward toward Trinidad on my Cuba map. I was heading southwest toward Cienfuegos, a small city of about 150,000 on the southern coast of Cuba about 160 miles from Havana. If I didn’t have to worry about reaching Trinidad before dark I’d detour at the southern coast and turn eastward to see Playa Giron, or the Bay of Pigs, but decided against it.

Instead I focused on the status of two tanks—filling the rental car’s gas tank and emptying my full bladder.

Surprisingly, gas stations in Cuba are seemingly plentiful. Bathrooms, on the other hand, not so much.

Stopping for gas, I searched for a restroom and saw none. As I paid for my gas in cash, I asked the man behind the counter where they went to the bathroom.

“We can’t use ours anymore, every time we flush, raw sewage pumps out from the broken pipes,” the wiry station attendant said. “But if you go on the military base they will probably let you use theirs, that’s where we go.”

I had not noticed that the gas station sat just outside a Cuban Army military base. Taking a deep breath, I walked up to the gate guard who waved me toward the nearby unmarked door and let me use their bathroom.

It was a windowless room with a toilet base and a broken sink. The door did not lock and it had a dirty window in the top half. Anyone walking past could guess at what the occupant was doing inside the hot, airless room. The toilet flushed but only barely. My trusty camera bag yielded toilet paper and sanitizer for the task at hand and I emerged relieved, but dripping sweat.

Late April and it was already a hot, breezeless 93 degrees under the palm trees.

Back in the car, I focused on driving to Cienfuegos.

Cienfuegos is named after Camilo Cienfuegos, a general in the Revolution who is revered in Cuba for his leadership in the education movement. The colonial town is also known as La Perla del Sur or Pearl of the South, founded in 1819 in the Spanish territory but initially settled by French immigrants to trade in sugar cane, tobacco and coffee. Its 25-block city center boasts neoclassical style buildings from its founding and the planned town is considered an example of modern urbanism in Spanish America.

Eager to see the city center I entered Cienfuegos just as the rain started to pelt the streets. My attention was on playing vehicular Frogger, avoiding pedestrians dashing across the flooded streets as well as the bicycles and pedicabs streaking across my path.

I slowed to a crawl as I drove through the residential parts of town. The grand neoclassical buildings gave way to endless rows of dreary wooden structures with laundry hanging outside windows now getting drenched in the sudden downpour.

I would not stop in Cienfuegos after all. I spotted no other vehicular traffic, only masses of huddled hitch hikers desperate to catch my eye, waving their Cuban pesos.

On the edge of town I had reached a T intersection and looked closely at the highway sign. It said Trinidad but the arrow pointing the way was obscured. Which way should I go?

I tried looking at my map but noticed out of my peripheral vision two young men waving at me to roll my passenger window down.

“You need to go left, you’re going to Trinidad, right?” one of the men said.

“No one goes to Playa Giron, that’s if you go right,” the other guy added, shaking his head. “Too many military patrolling the beach.”

“Can you take us to Trinidad? Please? You can drop us off anywhere,” the first man said quickly, repeating it as the rain dripped down his face. He had on his best puppy dog face and for added effect, shivered a bit.

Hitting my head on the steering wheel in between my two hands gripping it at the 10 and 2 positions, I realized these two smart guys had figured out the best way to catch a ride to the tourist destination of Trinidad—separate themselves from the pack back in town. Smearing the dark substance on the arrow pointing to Trinidad was a nice added touch.

Moving my purse and camera bag to the front passenger seat, I unlocked the car doors and motioned them inside.

“Dale, come on in then,” I said without smiling.

What I would never have done in the U.S. I had managed to do in Cuba—give a ride to two men I did not know.

Armando and Eduardo were tourist guides who worked the beaches and other outdoor areas in and around Trinidad. Armando was the chatty one who had hooked me into giving them the ride.

I got a narrated tour on my drive to Trinidad at least. As soon as we left Cienfuegos, hugging the southern coast on an empty road, the rain stopped and the sun came out, turning the drive into a pretty tourist commercial for Cuba. I drove across an elevated road that Armando told me was called Cancer Alley, cancer for the astrological sign featuring the crab.

(If you look at the hyperlink, it’s an article about the crabs invading the Bay of Pigs or Playa Giron which is along the same coast I was now driving but heading east.)

Armando would not stop talking. I was on my guard yet interested in these two. Eduardo would only look out the car’s window, while Armando asked me questions.

There was only one brief crack in his cheery nonstop chatter, when Armando talked about working every single day as a guide to the many British, German, and Canadian tourists who visited Trinidad’s beaches and moutains.

Almost to himself he said in a softer voice, “I am sick of so much sun.”

Driving over the bridge on the Circuito Sur or Southern Circuit road, at last I had reached the entrance to Trinidad, one of the best preserved colonial cities in the Americas and jewel of Sancti Spiritus, the province of my mother’s family. 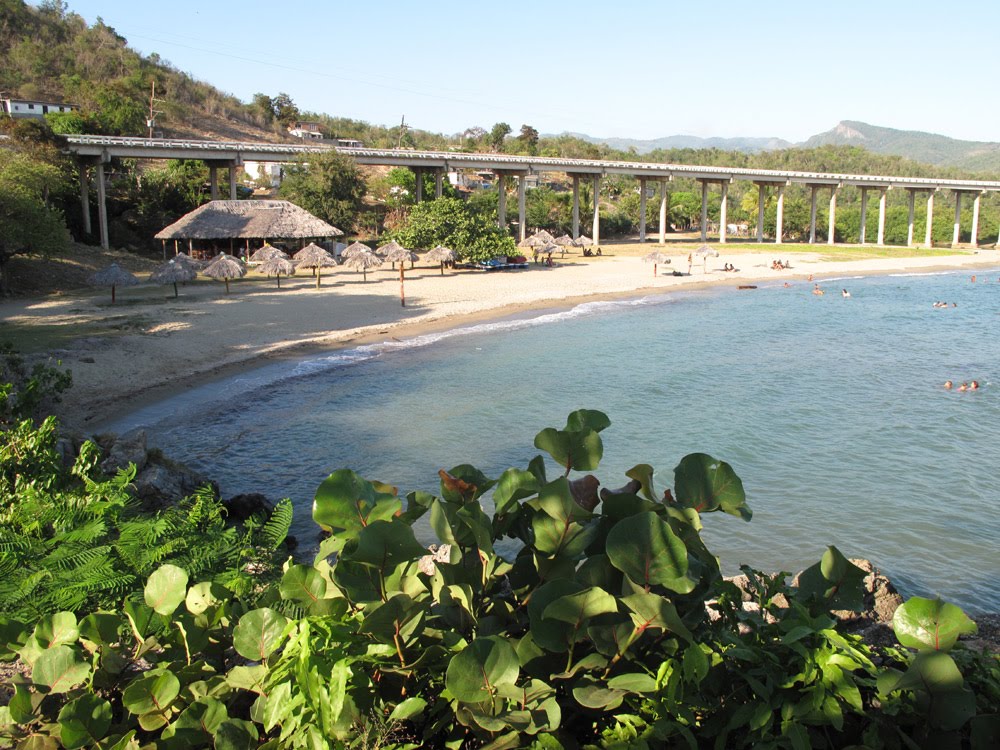 What happened next is still a blur to me. I was only able to reconstruct events after I had dropped off my two tour guides.

I entered the 500-year old colonial town and instantly realized I had no idea where to navigate on the rabbit’s warren of small streets to find Casa Magaly, the casa particular where I would stay during my time in Trinidad. Before I could even speak the words, “Hey guys, where shall I drop you off?”Armando started yelling from the back seat.

“Stop, stop, stop the car, look! Those guys are waving at you!” Armando shouted.

Stupidly, I stopped at the first corner where a group of about six young men hung out. They indeed were pointing to my car.

Before I could say anything or get out of the car they descended on the back right tire of the rental car. By the time I had gotten out and circled back to where they stood, they had done their work.

The tire was flat and losing air rapidly.

Looking at Armando, I gave him my most fierce angry Cuban mom look.

“Don’t worry, I know a place where they can fix it good and fast, I’ll show you!” Armando said quickly.

No price was ever mentioned, as the tire repair man never said a word while he watched Armando jabber at me. Eduardo first suggested swapping the flat tire with the spare in the trunk. 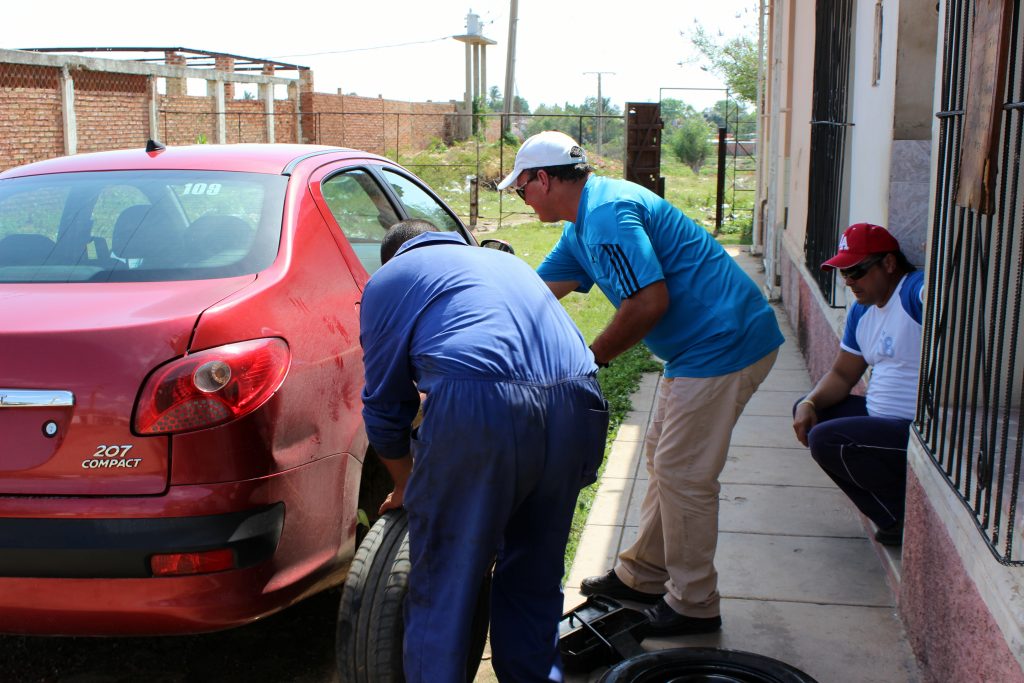 The Mechanic and Eduardo change the tire while Armando sits, quiet at last.

In my rental car inspection at the hotel in Havana it never occurred to me to check the condition of the spare tire. It was flatter than a Cuban pancake.

The silent mechanic took the flat tire and dunked it into a tank filled with water to find the puncture site, then got to work, applying a wide patch with plenty of adhesive.

“He’s really good, he’s doing a better job using the big patch and not skimping on the glue,” Armando said, trying to lighten the dark look of fury on my face. 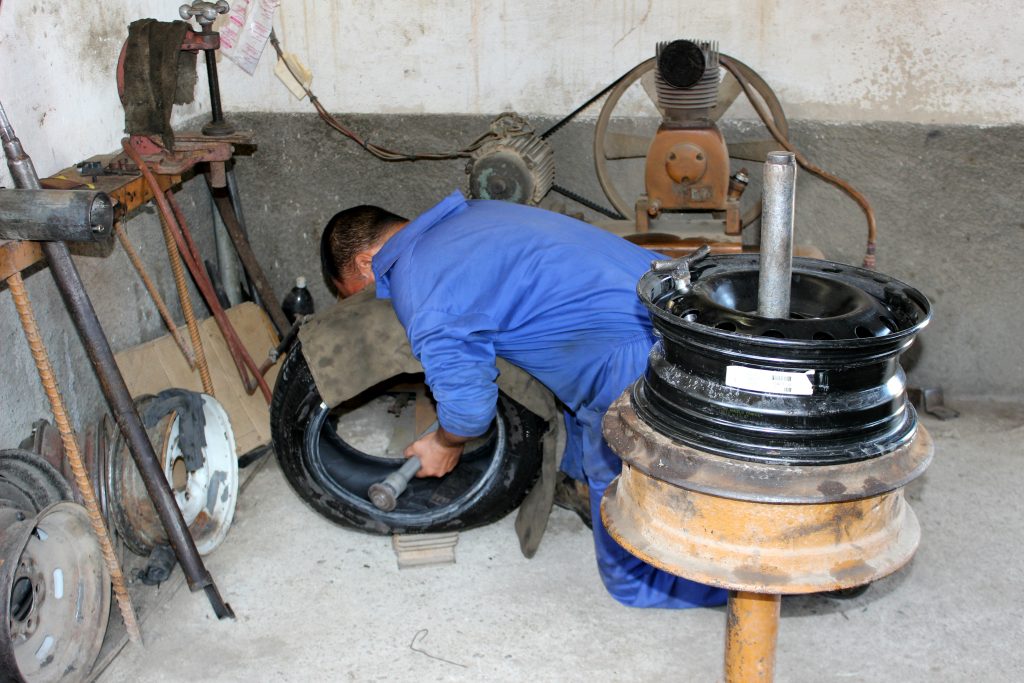 The Mechanic fixes the flat tire.

Eduardo wisely had walked off to the edge of the littered empty lot where The Mechanic had his shop.

After about 10 minutes, the tire was repaired and mounted back onto the car.

The Cuban Charles Bronson’s only words to me the entire time I was there was to quote the repair price: $45.

“None of you have any shame,” I shot back, then handed the money over to The Mechanic. He smiled slightly and turned away.

The typical price for a tire repair is $2 or $3 at most. They had netted the equivalent of two months’ average Cuban salary in this transaction. Not bad.

“Maybe the tire got punctured on a crab claw on Cancer Alley,” Armando said, as he navigated me to my casa particular.

“It’s not the season yet, Armando, it doesn’t start until May,” I told him. “I’ll drop you off here, since this is where I’m parking.”

“Would you like to spend a day at the beach tomorrow? We can be your private tour guides? Or maybe a day in the mountains? I can show you where locals go to swim in the rivers,” Armando said.

The man would just not let me go that easily.

Briefly I considered it, only because my uncle had told me many happy stories from his childhood spent swimming in those same rivers, catching fresh water shrimp with his bare hands to cook over an open fire before going home.

“No thanks, I’ve already paid the toll to enter Trinidad, I’ll pass on your offer,” I said, unloading my suitcase.

Without a backward glance, the pair walked away, Armando silent at last.

*”Do not pass Go. Do not collect $200” is a phrase used in the Monopoly board game that has become widely used in popular culture to describe an action forced upon a person that has only negative results.

Featured image is of the entrance to Trinidad, Cuba, courtesy of Casa La Milagrosa in Trinidad.