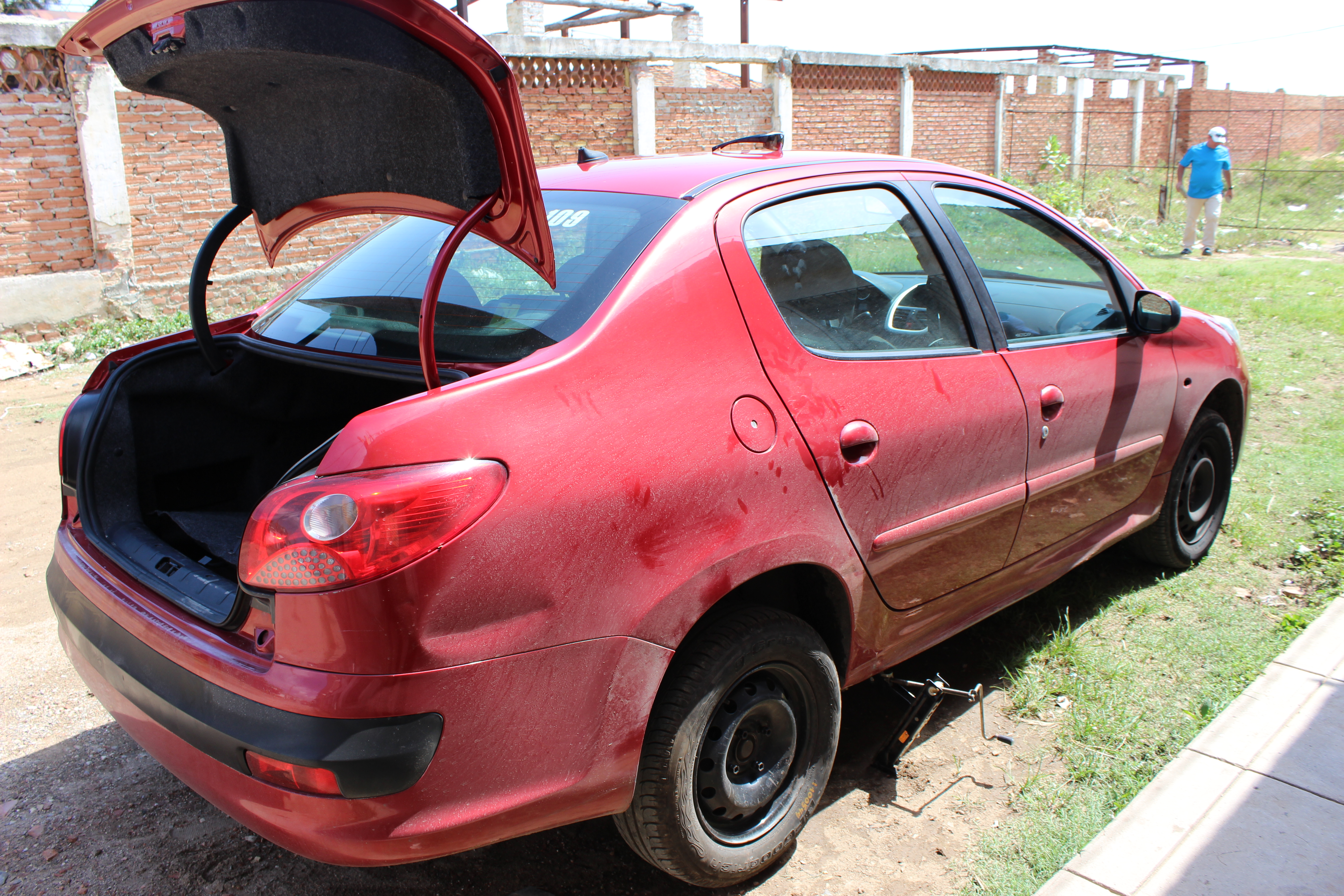 Ed’s household maid Maria and his driver David accompanied me as I tried to find a rental car after we had finished grocery shopping.

A visit to the first rental car kiosk near a hotel was short. The older man called someone and after waiting for about 10 minutes, he hung up.

“No hay nada,” he said. “There is nothing. You need to look at another hotel maybe.”

“Can’t you check the inventory on the …” I started to say. Then I stopped.

The man was sitting in stifling little booth in the middle of a paved parking lot berift of rental cars. David was off to the side, surreptitiously checking the internet on his cell phone using the nearby hotel’s free tourist WiFi.

What computer could this man check? Here, checking inventory meant calling a co-worker and hoping he’d answer the phone.

Getting into Ed’s Prius, Maria couldn’t help herself.

“You see, this is what it’s like to be Cuban, always ‘resolving’— siempre resolviendo,” she said from the back seat of the car.

We went to our next stop, a car agency several blocks away. We were trying a different car agency to see if we had better luck.

All rental car companies in Cuba, whether they appear to be owned by a travel agency like Transtur or Gaviota, are all run by a single entity: the Cuban government. Cuba loves breaking up functions under different ministries and institutions so the Ministry of Tourism oversees Transtur and the Cuban military operates Gaviota.

Both Transtur and Gaviota are run by the state.

I have no reservation because reserving online means using a credit card to reserve your vehicle. I could not take the chance of a deposit getting charged on my U.S. card.

You cannot use U.S.-issued credit or debit cards anywhere in Cuba — either to buy something or to get cash. MasterCards issued by banks with no American affiliation are the only ones that can be used in Cuba.  For example, a MasterCard from Bank of Montreal could be used.

The U.S. embargo prohibits U.S. citizens from spending money in Cuba unless it’s small amounts under a strict daily limit once you are in the country on one of 12 the U.S. Department of Treasury or DOT licenses for your travel. Having a $500 deposit held on a U.S. credit card from a Communist country on the DOT list would trigger a DOT-issued freeze of your assets. Not just that card, but all your assets.

I wasn’t going to take that chance so I arrived in Cuba without a car reservation.

The second place was out of cars. So was the third place.

The fourth place had a car, ¡que bueno!

David whispers to me as the man turns his back to us.

“Insist on test driving it first,” he said.

When I turn the car’s key in the ignition, the car blasts hot air. It’s set on air conditioning — the high setting.

The short drive around the block leaves me sweating profusely and determined to find another car at another place.

We go to a hotel in Old Havana and the older gentleman is smiling and gracious. David takes his customary position off to the other side of the lobby, head bent over his cell phone.

I sit at the rental agency’s desk and look around while I wait for the dapper gentleman to check somewhere mysterious out of sight. There are no computers anywhere on the desks, only a phone.

Paying in cash means a substantial deposit, a deposit that can be claimed to cover damages both real and manufactured. With no insurance you are at the mercy of the rental car company’s inspectores who can claim any damage the car has as yours to pay.

I am given the full blown indoctrination for renting a car in Cuba. The more I hear the more alarmed I grow. The man’s smile never fades, but he underlines each point in the long contract that is entirely in Spanish.

If I get a traffic ticket or am in an accident, I could be liable for all damages to the car and associated court costs. The word denuncia translates into “complaint” in English but its sound in Spanish is foreboding.

To denounce someone is viewed differently in Socialist countries like China or Cuba. Done at criticism meetings or “struggle sessions,” a crowd of people gather to publicly denounce someone seen as an opponent because of transgressions against the society and state.

The dapper man warns me of the numerous speed traps and to avoid a denuncia or speeding ticket.

If I am in an accident I must obtain a full police report. No report — I could be liable for all repair costs for the rental car.

He warns me NOT to lose the rental contract and to keep it just as safe as my passport. Losing it means lots of  administrative troubles and a fine should I lose it.

We inspect the car for over 10 minutes. The Chinese made Geely sedan has been picked over by locals keen to possess all its car emblems, blinker covers, strips of gasket edgings on the doors, and other odd bits one never notices until they are gone.  The car has been bashed, dinged, and scraped in multiple places, a consequence of hapless Cuban natives not used to driving and tourists driving and not entirely avoiding damage. The car has 60,000 miles and looks much older than its two years.

I am terrified at the thought of being indirectly responsible for a new loss if the car is parked and someone decides to cherry pick something else off on my dime, as I will be charged for its replacement.

I am also required to remove the radio from the dashboard when I park it. It is sitting at the bottom of my purse so I don’t forget to leave it in the car.

“Also, since you are going to Trinidad, be careful of scam artists,” he said. “They have some scheme where your tire gets a flat and you pay a ridiculous price to fix it. I have no idea how they do it but to be on the safe side, don’t pick up any hitchhikers.”

“That you are liable for its replacement, yes,” Señor Smiles confirms for me.

Hitchhiking is part of the Cuban culture and virtually everyone does it.

“Once you’re outside Havana where transportation is very limited there will be many hitchhikers,” he said. “It’s up to you to decide if you want to give someone a ride. The hustlers will spot you by the car and its plate and they will try to make you stop. Ignore them. Some can be persistent and will tell you anything to convince you to pick them up.”

Cars in Cuba have distinctly colored license plates and rentals have a red background plate. Everyone who sees it will know I am a tourist, one with enough money to rent the Geely.

Before my trip, I searched the internet and did not see much about driving in Cuba. This does not surprise me, as the the number of people renting and driving in Cuba still is low. Here’s a short video of some car guys trying to rent and drive a car in Cuba.

With such limited availability in cars and models, renting a car in Cuba is more expensive than elsewhere in the world. 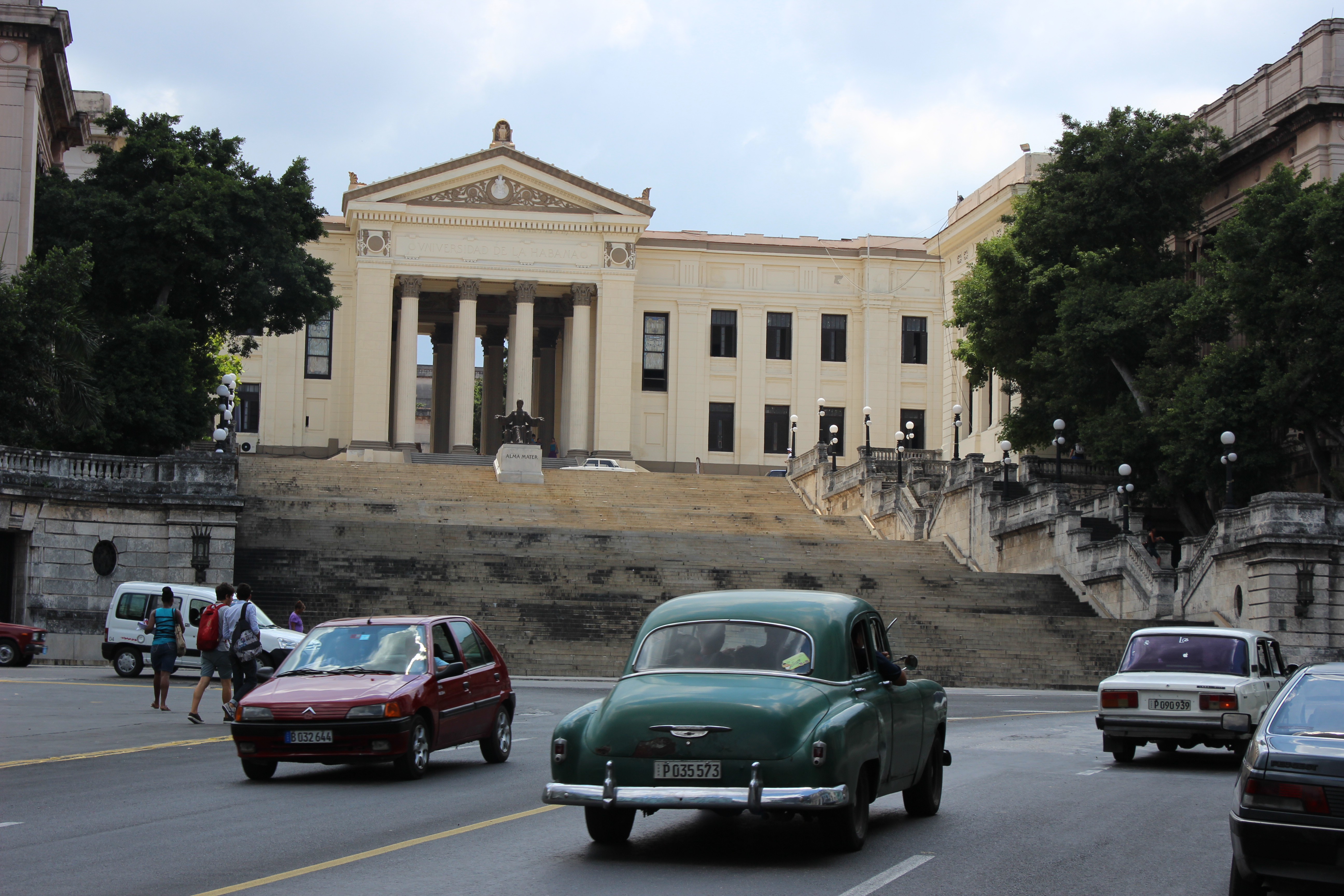 The mix of modern and vintage cars by the University of Havana reflect the small inventory of cars in Cuba. Most modern cars are left behind by diplomats selling their used car for a high price before reassignment to their next posting.

As for renting a vintage car —heck no! First, the average driver will never be able to drive such precious vehicles. Second, these 1950s era cars are on the road by the very grace of God and the ingenuity of the Cuban people. Parts are made in people’s homes and backyards. Motors and other car parts are salvaged from everything from a lawn mower to washing machines.

Nope, nope, nope. Not an option. You can rent one and its driver can drive you around slowly in Havana for a couple of hours. But you won’t be going hundreds of miles out of sight of the lucky person who owns the money-making miracle of a vintage vehicle.

Now comes the first challenge: Navigating the car out of Old Havana to Ed’s house in Miramar. I have no GPS, no cellphone, and no idea.

Following David, I leave the Havana Libre hotel (“Free Havana”) and try my best to memorize the route. Left out of the hotel. Left onto the street with the old movie theater. Go down toward the Malecon and the ocean and pass the gas station on your right. 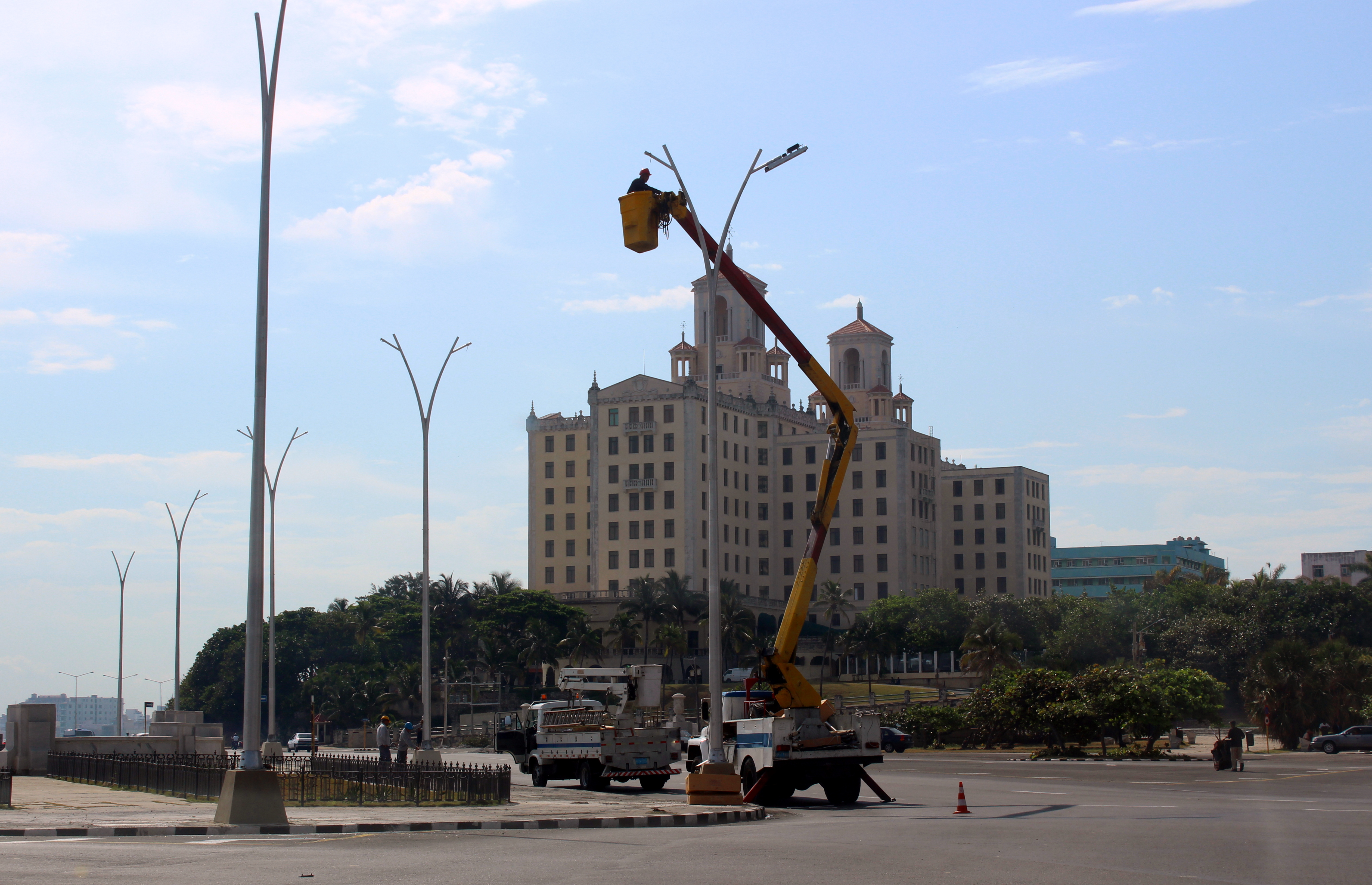 Street lights are installed in front of the Hotel Nacional in time for the May 1st observation.

Left at the bottom of the hill at the base of the Hotel Nacional and make the left at the statue of Fidel holding the young Elián in his arms.

Down Quinta Avenida, I navigate past old crumbling mansions through the first traffic circle, then the second one with its gas station. As it the sun sets, I struggle to find landmarks. 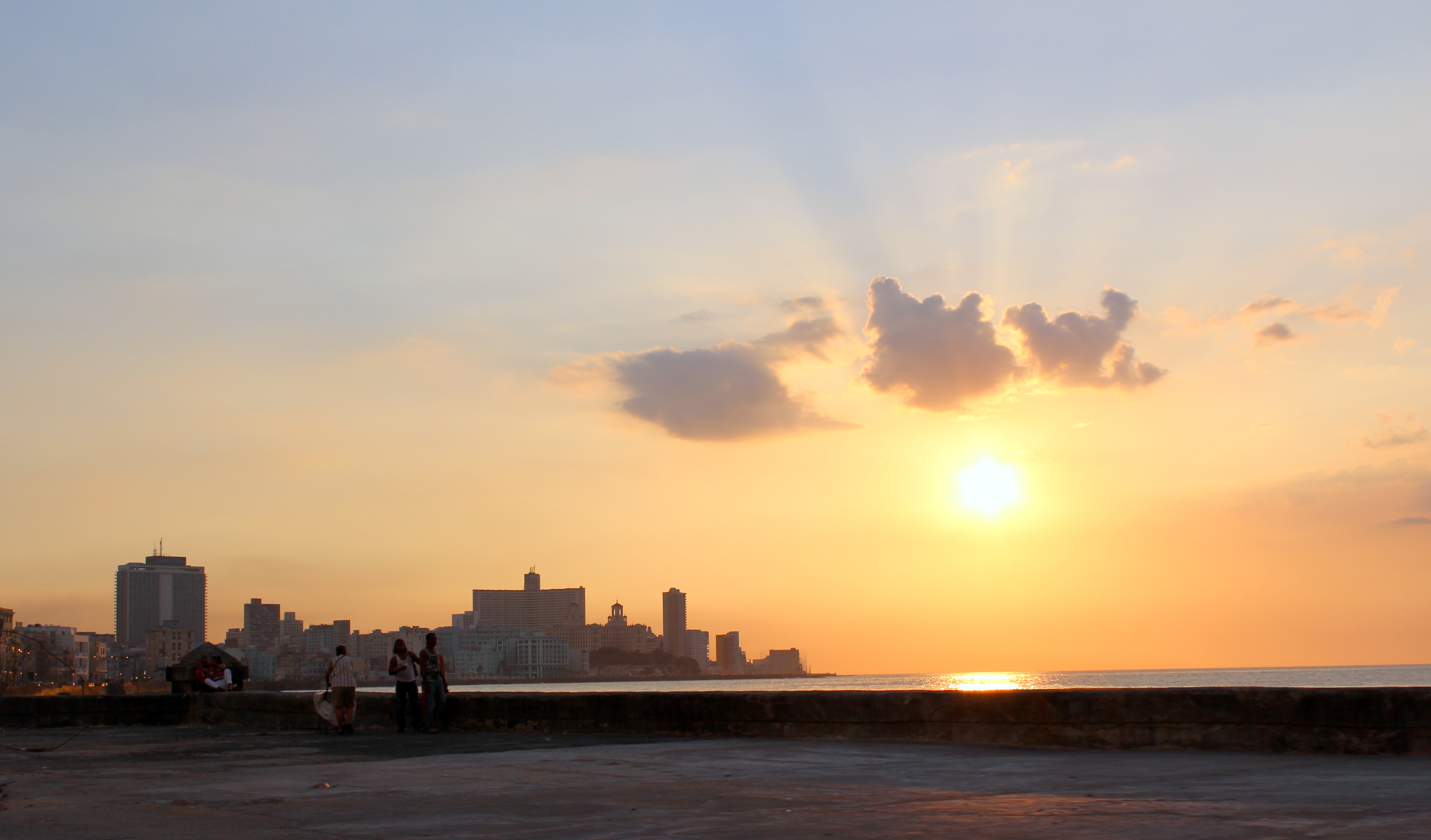 Cubans relax on the Malecon at dusk.

By the time I reach Miramar it is nighttime. I follow David and make the left down a neighborhood street and frantically search for a street sign, any street sign. With none in sight I spot the decaying yellow church on the right corner with no roof.  Thank goodness for notable landmarks. (Lord forgive me, please.)

Down the street there is some public expo place on the left and we turn at the elementary school with the spooky Cubans looking into the windows of Ed’s house across the street. Finally, we are inside the gated enclosure and I park the Geely next to Ed’s Prius, relieved to get out of the car.

The car’s radio in still in my purse, as is the contract. Tomorrow, I leave the bubble that is Havana for the rest of Cuba.