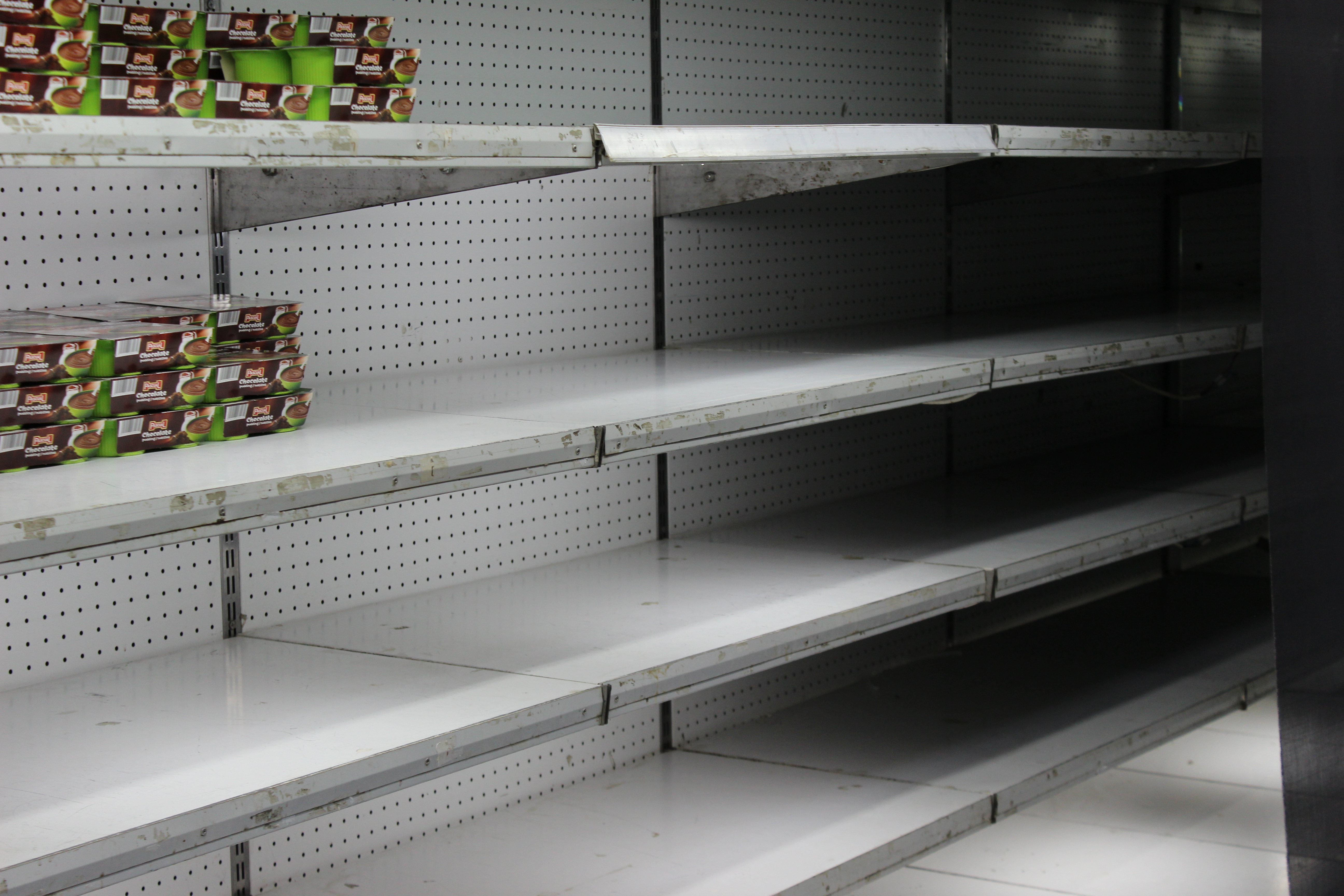 After a disappointing lunch in another Cuban state-run restaurant—mystery pork meat that reflected the sad life the pig must have lived before reaching my plate—David and I return to Ed’s house.

It was time for David to go shopping for the household and Maria insisted that I, Ms. Americana, come along for the excursion to Supermercado 70, located near the Russian Embassy. This is the only full-fledged grocery store I will see in my entire trip across Cuba. Havana only has a handful of large grocery stores and I discover their selection is rather anemic on any given day.

A former diplomat-only store, the Supermercado 70 has security guards in the crowded parking lot and at the entrance to the busy store.

Grocery shopping takes up much of time in Ed’s household, Maria tells me. David and Maria are always on the lookout for food.

“We are lucky that Ed travels to the U.S. for work,” Maria said. “Last time, he came home with an entire cooler filled with bars of butter. It’s been months and months since we’ve seen any in the stores.

In Cuba, grocery shopping requires patience, determination, and lots of time. There are no warehouse or mega stores where you can find everything in a single place.

Instead, multiple trips to smaller stores that may or may not have what you’re searching for take up most of the day for many average Cubans. Fresh fruit, vegetables, and pork (when available) can be found at the farmers’ markets. The country imports about 80 percent of its food. The Cuban government has never mastered the art of market distribution and delivery. For months on end there can be a shortage of an entire food group like the butter Ed had to bring back from the U.S.

There are no Communists skilled in supply chain, apparently.

Other basics — rice, beans, sugar, eggs, and chicken come from the neighborhood ration store and butcher. Cubans still use a food rationing system the government has run since Che Guevara first set it up in 1962. Shoppers bring their libreta or ration book to the grocery store for their basic ration of rice, eggs, beans, and other staples bought at a subsidized price, for about $2 a month.

The rations are meager for an entire family—only five eggs for the month means an average weekend breakfast in an American home would wipe out a Cuban’s monthly allotment.

The 10 kilograms (kg) or 22 pounds of rice explains the rotund nature of many older Cubans. In addition, every month a Cuban can buy 6 kg of white sugar, 2 kg of brown sugar, 1 cup of cooking oil, and a single packet of coffee per person per month. Every 10 days a Cuban can buy 2 kg of chicken and every three months a bag of salt. Milk is provided only for pregnant women and children under 7 years of age.

Black market vendors fill in the gaps selling seafood and other hard-to-find items. The grocery store is really only for the well-off in Cuba who can pay in CUCs for luxuries such as imported beef, dairy items like milk, yogurt, and cheese, and a random selection of imported, packaged food like pasta, potato chips, and jam.

“If you find toilet paper anywhere, you load up as much as you can,” Maria said. “It is always a struggle to find the basics, let alone anything fancy.”

As soon as I walk into the crowded store, I see the first aisle has a freezer case running down the middle of the floor space. I peer inside and see…nothing. It is empty and would ordinarily hold meat of some kind. The refrigerated case lining the aisle to my left is also mostly empty. As I cruise the second aisle, I spot mostly empty shelves. In the store’s wan lighting I snap a quick photo with my DLSR but no luck.

I am spotted almost immediately.

One of the security guards threatens to confiscate my camera if I don’t stop taking photos. He means it.

I only have the one photo from my shopping trip. For a short video taken inside another Cuban grocery store, watch here. It’s spot on, capturing the typical chaos. For a couple of good photos showing empty shelves and refrigerated cases, take a look at this story. She didn’t have her camera confiscated.

I could not document the endless empty shelves in the small store. No meat. No chicken. Plenty of mystery ground “meat” in a colored package that did not identify what exactly it was. Little dairy or eggs. No coffee (travesty!). Easily one-third to one-half of the supermarket lacked inventory.

No onions or garlic anywhere, I spot the basic spices of Cuban cuisine—cumin, bay leaves, pepper—in a small glass case next to the register. I count perhaps a dozen spice packets total.

Another aunt had suggested I bring compressed bricks of Cuban coffee and packets of spices with me to give as gifts. Good advice, tia!

Maria juts her chin out at the empty shelves. “See? This is what it is to be Cuban,” her stern glance says as we quietly circle the aisles as if looking for a pew to sit in an empty church.

“It’s much better now than it was during the ‘Special Period’ when Russia stopped its aid to Cuba,” Maria says sotto voce.

Off to one side of the store is the electronics section. Overpriced outdated electronics are for sale, along with the oddest thing I’ve ever seen in a Cuban bodega.

It’s an electric espresso maker, with the heating element built into its base. Priced at $50, it’s 2 ½ times the average Cuban’s monthly salary.

Strangely, I contemplate buying it, picking it up. David looks at me and shakes his head.

I put down the expensive electric espresso maker.

Our next Herculean task after dropping off the few bags of groceries at Ed’s house is to find a rental car for my trip to Trinidad tomorrow.

In my first 36 hours on island I realize why the aunt who arrived in the U.S. most recently had scoffed at my idea of writing a book about Cuban regional food and cooking here. Meat has been optional, as has been any variety in produce.

I might be surprised by the cuisine I’ll find on my travel outside the bubble of Havana, we’ll see. Something tells me regional cuisine will also be optional.

4 thoughts on “Food is Optional: Grocery Shopping in Cuba”