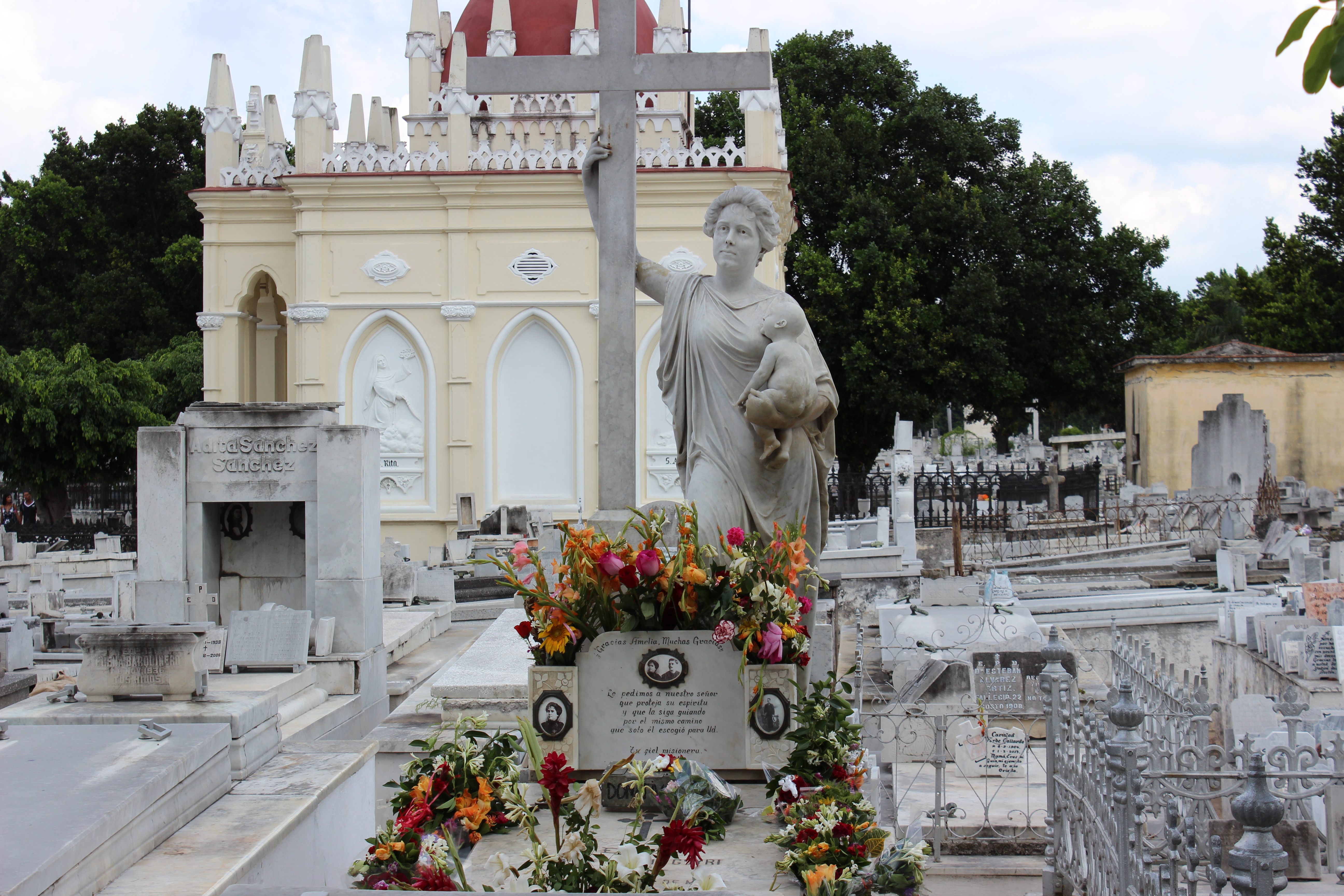 If you ever wanted to slip back in time, visit the plazas of Old Havana, Cuba. 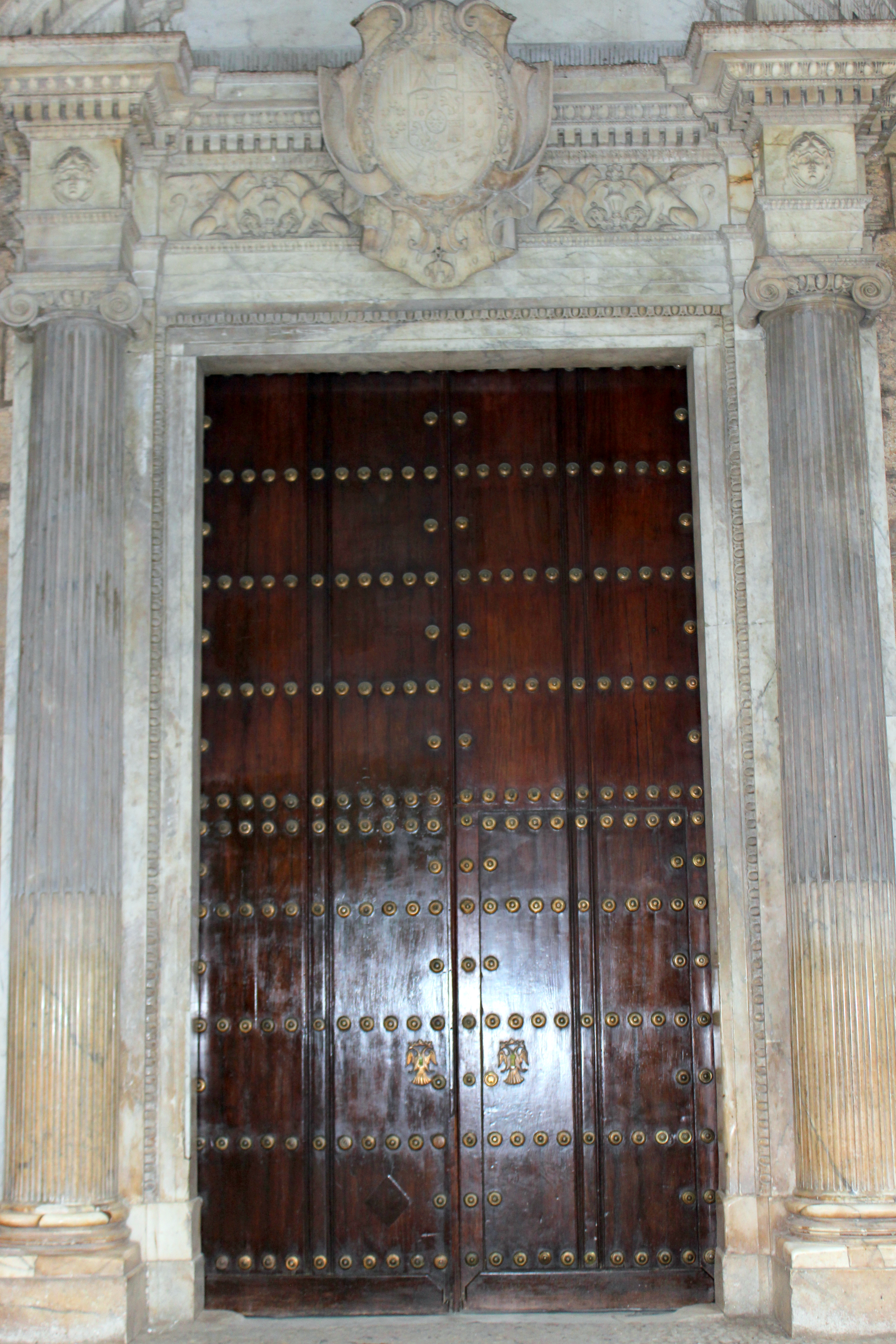 The massive doors to Havana’s Office of the City Historian 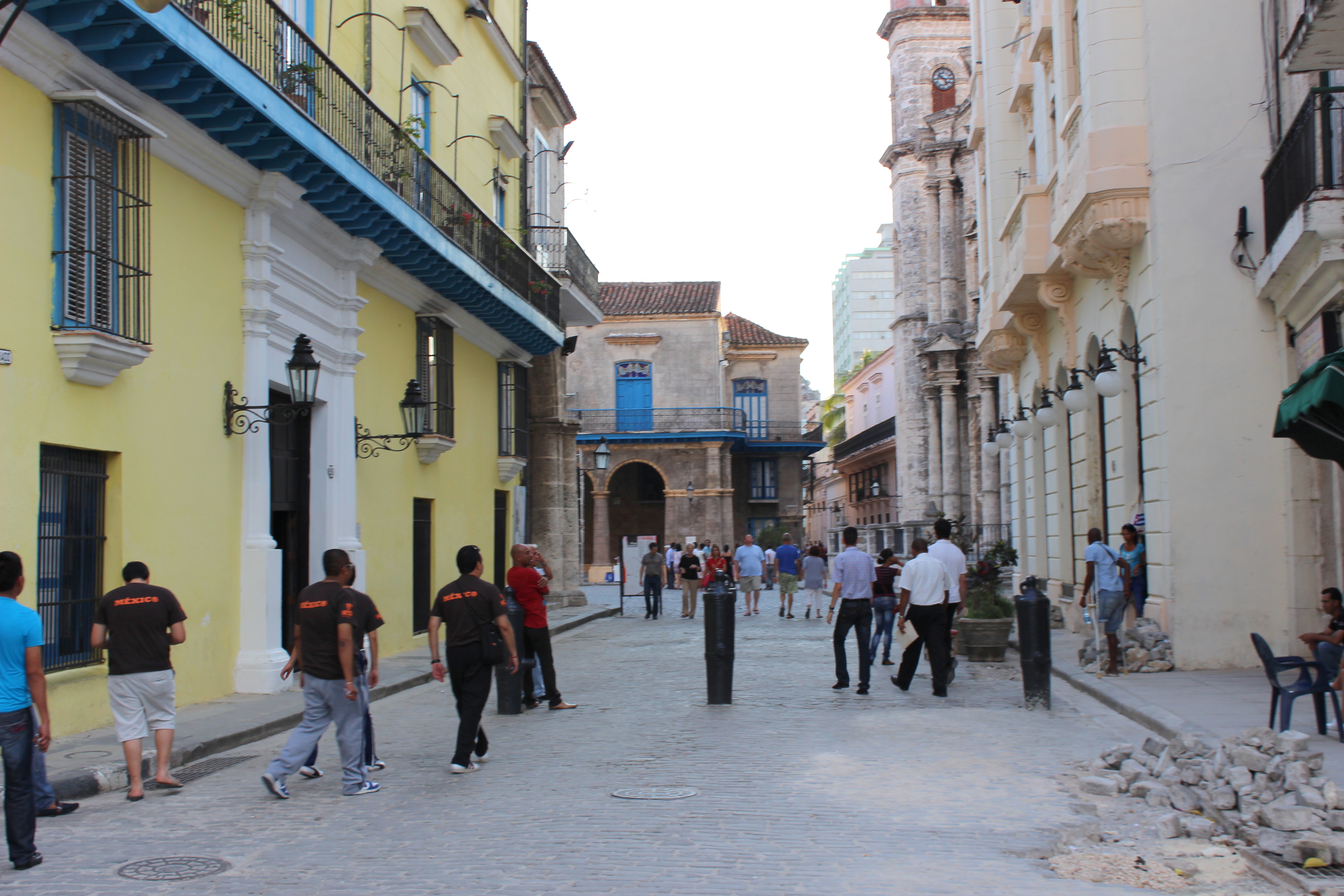 A plaza in Havana has some minor restoration work done.

To date the Office of the City Historian has redeveloped 4.5 square miles of Old Havana. With so many derrumbes or collapses of buildings from disrepair happening frequently, saving historic buildings has become an urgent mission.

It also means David and I walk in the middle of the streets with unrestored buildings, just in case one sheds a chunk of concrete onto our heads. 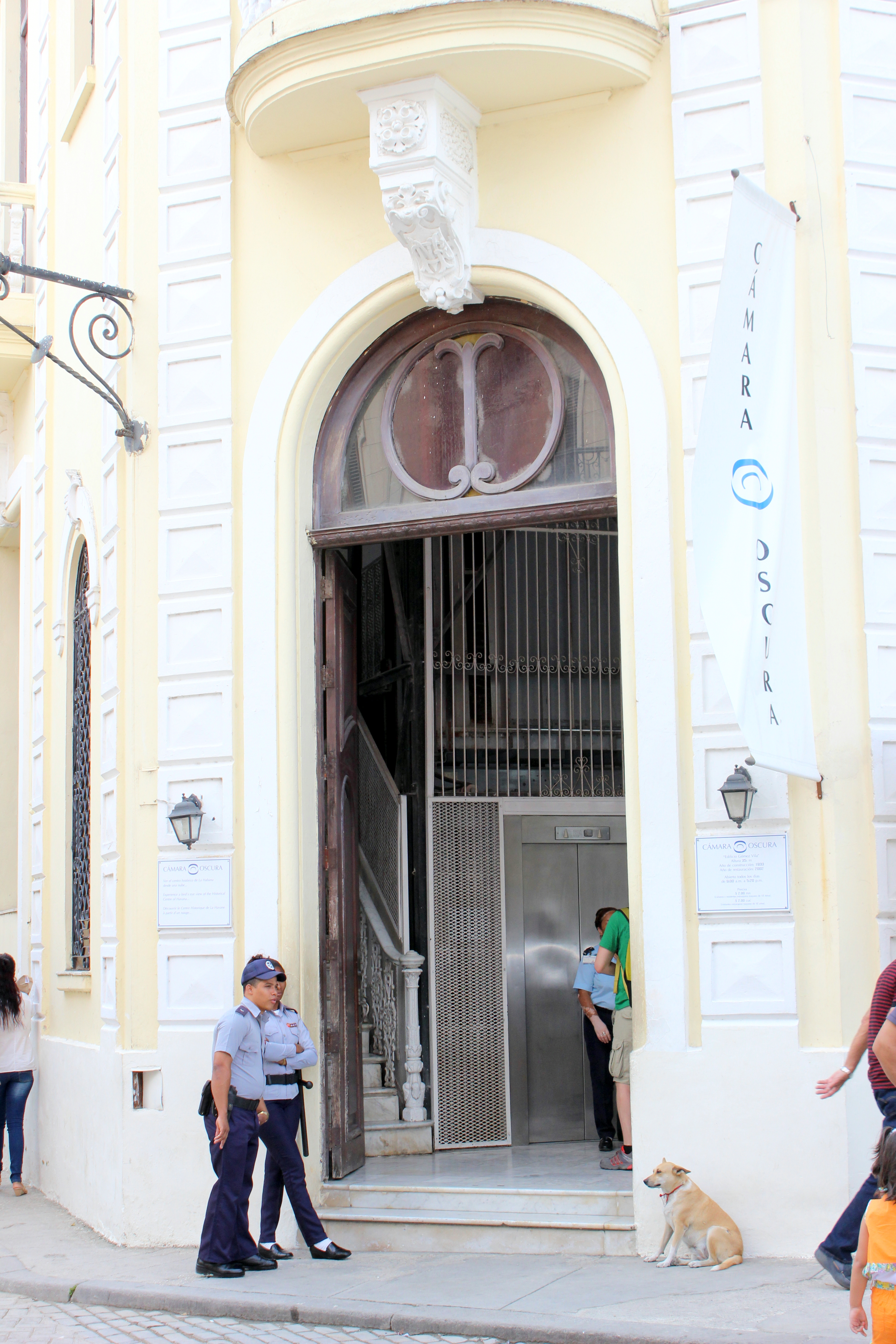 A gift from the Council of Cadiz, Spain, to the City Historian’s Office, Havana’s Cámara Oscura is the only one of its kind in Latin America and the Caribbean.

We visit the Cámara Oscura located on La Plaza Vieja. Dating back to 1559, La Plaza Vieja or “old plaza” reflects the success of Havana’s Office of the City Historian, which has been restoring the crumbling facades of the historic La Habana Vieja block by block. The capitol’s most architecturally eclectic square, Cuban baroque styles mix with Gaudí-inspired art nouveau. 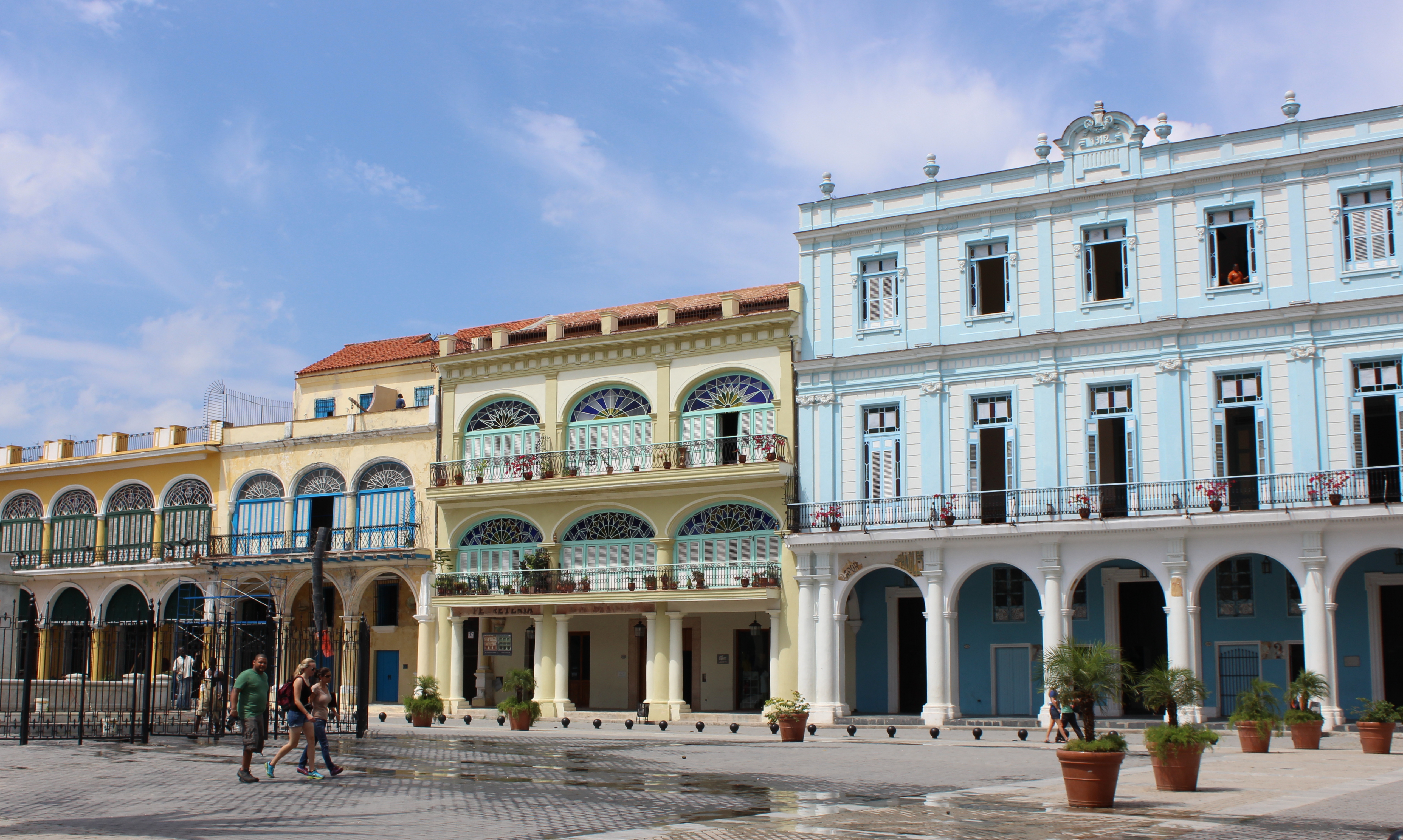 La Plaza Vieja, across from the Camara Oscura, is home to gorgeously restored buildings now used for restaurants and other state-run businesses.

The Cámara Oscura, or dark camera, is a large-scale pinhole camera that projects an image onto a dark screen. The concept was first invented by Leonardo da Vinci. Situated on the top floor of the early 20th-century Edificio Gómez Vila, the plaza’s tallest building, we are treated to 360-degree panoramic views of much of Old Havana in real time.

I also get to appreciate that view outside from their rooftop. You’ll see the Potemkin Village effect from the limited restoration of Havana. It’s a pretty stark demarcation line between the restored and rejected parts of the city. 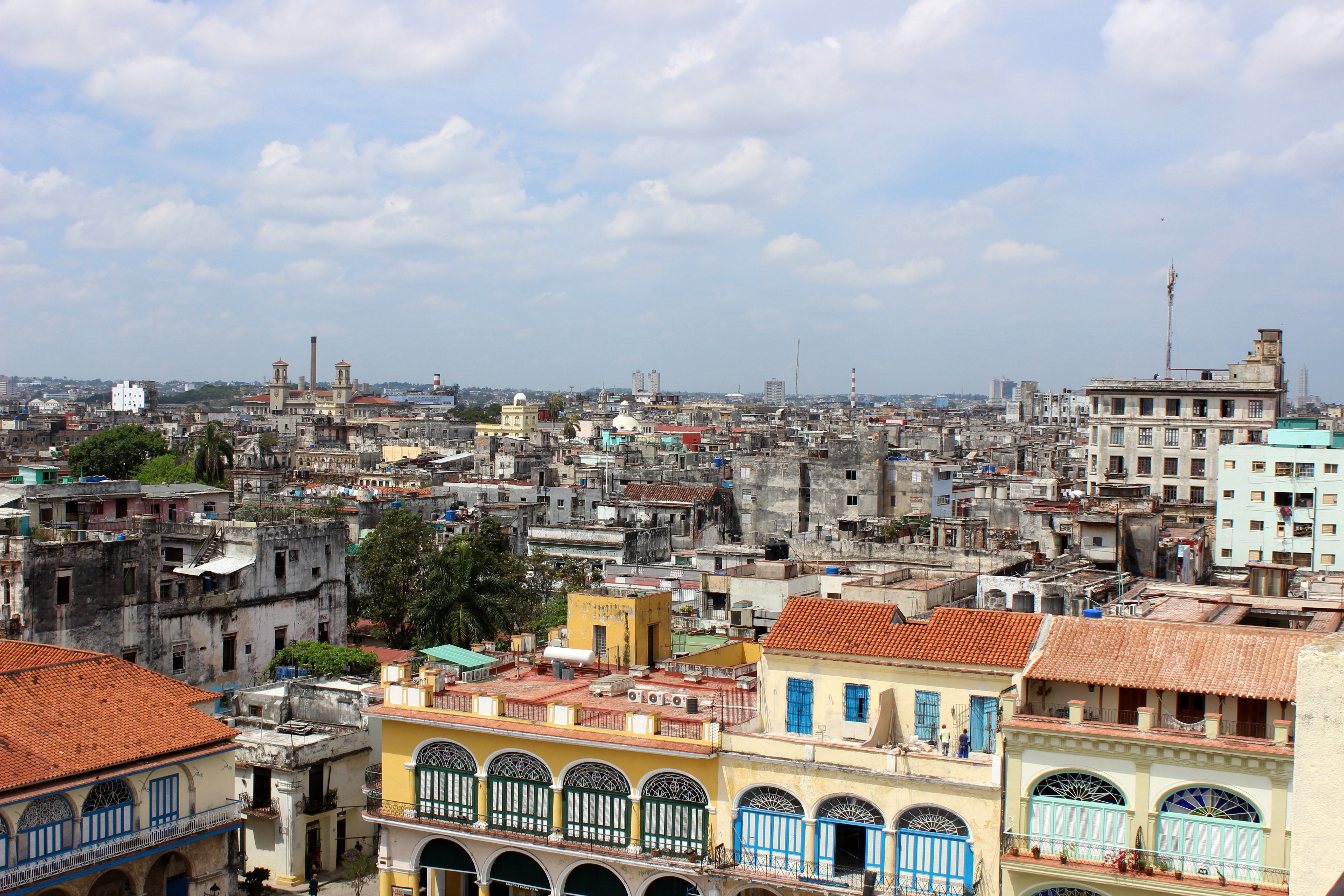 Beyond the restored buildings on La Plaza Vieja the rest of crumbing Havana waits its turn.

As we walk along La Plaza Vieja, David ducks into an athletic shoe store alone to check out a pair of sneakers. After we reunite, he tells me again about a pair of Nike sneakers he’s had his eyes on, priced at $120 CUC or $120 U.S. dollars.

“It’s a really good price for sneakers of that quality in Cuba,” David goes back to sneaker talking.

What am I to make of this verbal obsession? I wonder if he’s hoping I’d buy them for him. I have never owned a luxury brand of sneakers in my life.

Instead, I steer the conversation to learning English once we are back in Ed’s Prius. As we drive by the sad remains of the formerly (pre-revolution) bustling Chinatown, I probe his knowledge of English. 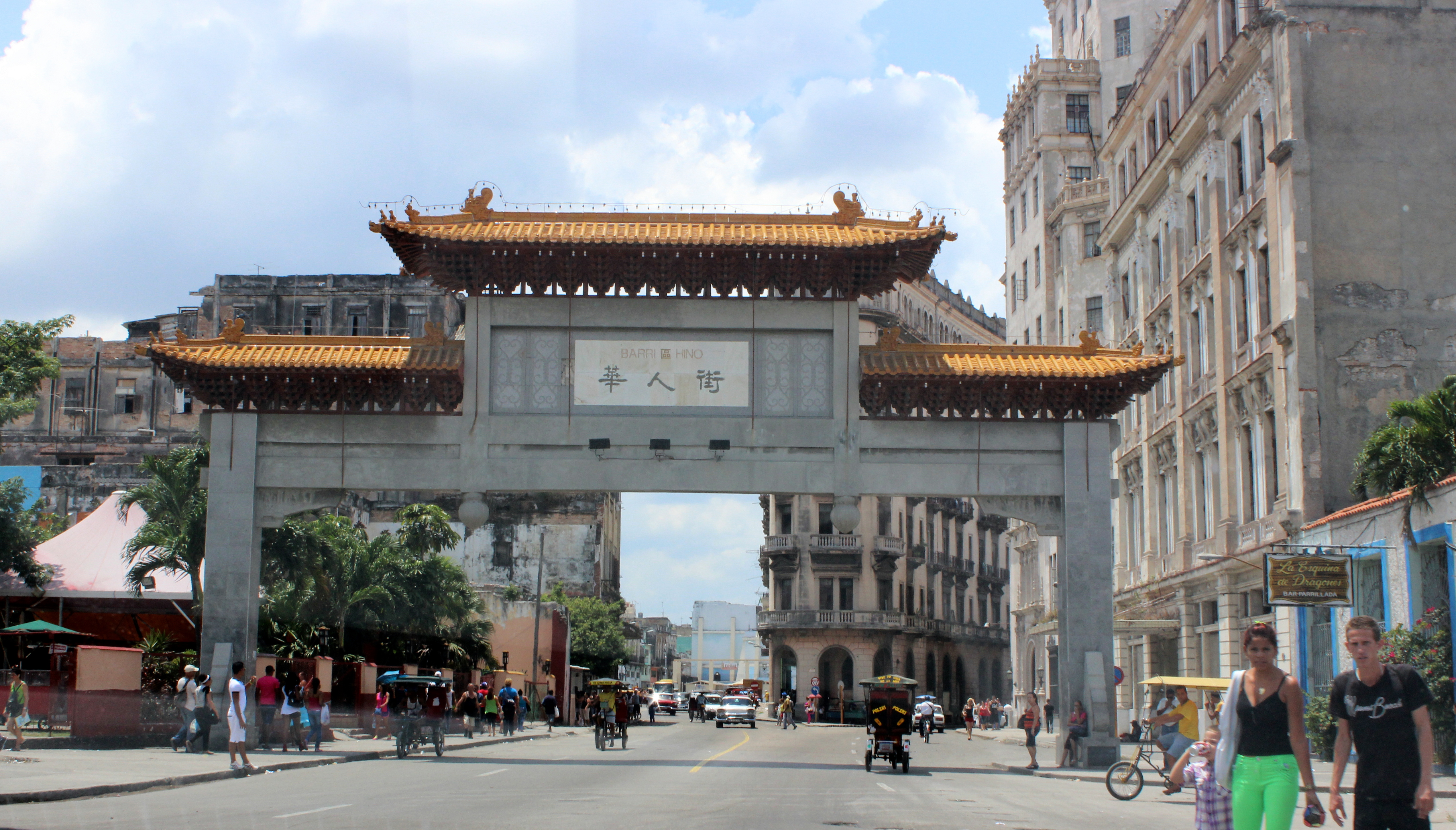 The entrance to el Barrio Chino or the Chinatown of Havana. Few Chinese remain.

“I dropped out of high school,” David explains. “I hated studying. I do want to learn English because I want to go to the U.S. one day.”

“Good, we can start now!” At last, I’ve broken the Nike spell.

“No, no, I really cannot learn English, I’m no good,” David begged.

“Let’s start with car terms then,” I ignored him. “If you go to the U.S. you will need a job and I’m guessing you’ll want to work with cars, right?”

Looking over at me, he wrinkles his nose at this practical, capitalist discussion of work.

“See that black smoke coming out of that car?” I said, starting the lesson. “That is called “exhaust,”

Nope. That’s a hard word to pronounce for a Cuban, and for this one, especially challenging.

“Ok, look out at the horizon, see that tall smokestack bleching black smoke into the sky?” I pointed. “That is a ‘refinery.’”

I have no future as an English teacher, as I’ve chosen another really hard word for David to pronounce.

Our next stop is Cementerio de Cristóbal Colón or Colón Cementary. It was established in 1876 and named after Christopher Columbus. The Madrid-educated Galician architect Calixto Arellano de Loira y Cardoso designed the 150-acre city of the dead in a grid of main central avenues and smaller side streets around a central chapel that looks like the Florence Cathedral Il Duomo.

The cemetery’s layout organizes the final resting places of the dead according to their rank and social status, with the wealthy and well-connected located on main thoroughfares while the lowly born get buried in the outlying areas. With over 500 major mausoleums, chapels, and family vaults, the ornate styles span from the Renaissance to neoclassical to art deco. 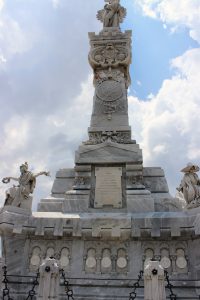 There is an incredibly elaborate 75-foot-tall memorial for firefighters who died in a 1890 citywide fire and tombs set aside for various trades and professional organizations. Poets, filmmakers and musicians are here also, including Ibrahim Ferrer Planas of the original Buena Vista Social Club. There are also abandoned tombs and chapels of families now living in exile.

One of the workers showed me the most famous ones– like the one a grieving husband built for his beautiful and adored wife. The carved motifs around the tomb’s door are of a particular rose that was said to resemble her lovely cheeks. He adored her so much that he had this same rose motif carved all over the tomb’s interior roof, with slats especially cut so that when the sun shone inside, it would cast enlarged shadows of these intricate roses in a huge circle both inside and outside around her tomb. 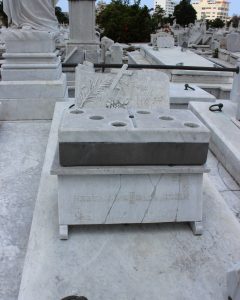 Another woman who died around 1930 was known to be an excellent domino player, except at her last game.  She had the last domino to win the game, but another player thwarted her winning move. She had such a fit, she died of a heart attack with her domino in hand.  Her tomb has a huge carved double three domino on top (the one that the player used to upset her long winning streak). Below her name is the layout of her last domino game so everyone can see why she lost!

After touring the older high-rent district, David drove me to the section of the cemetery where people are buried today.

I took no photos of this sad, dispirited portion, since there was a burial in progress. We parked at a discreet distance as David told me what happens to Cubans after they die.

The cemetery holds over 800,000 graves yet it has over a million interments. This means that space for this still-operational cemetery is at a premium. Remains are removed after a year to be boxed up and put in storage in order to make room for new interments.

Five bodies are stacked in a large concrete holding tank that’s secured with a heavy lid. There is no adornment or marker, only a number. After a year, the bones are disinterred and placed into a metal filing box upon which a worker crudely writes the name of the deceased using a black marker.

Just past the field of identical temporary concrete bunker graves is an open shed with stacks and stacks of metal boxes holding remains. They are sloppily stashed on the shelves, many crammed in or shoved back into place. Some have wilted flowers on top of a metal box here and there, while others have a plastic carnation stuck in the crevice of the box’s side cutout to use as a handhold for carrying.

Think matte black utilitarian metal file boxes. We watched as family milled around one that held the remains of their loved one.

I spot a yellowed handwritten note halfway stuck into one box. The sight of it is heartbreaking.

From thousands of beautifully carved Carrerra marble roses to plastic and dead flowers shoved in between crude metal boxes, the difference could not be more stark or depressing.

“Now you see what we Cubans have to put up with here,” David said as he turned on the car’s ignition. “If I stay here, I’ll end up in a box like that if I’m lucky to get a spot in the temporary grave first.”

“What happens if there’s no spot when you die?” I asked David.

“Many Cubans don’t believe in cremation, but if there’s no spot for you when it’s your turn to die, you wind up like, what’s that word again for ugly black smoke?”

In Cuba, even the dead wait their turn…if they can.

Featured image shows the tomb of a young mother who died giving birth. Legend says the newborn was buried alongside her torso but when the grieving father opened her tomb some time later, he found the baby nestled in the dead mother’s arms. Photo taken by Iris Gonzalez.

One thought on “Even the Dead Must Wait Their Turn”