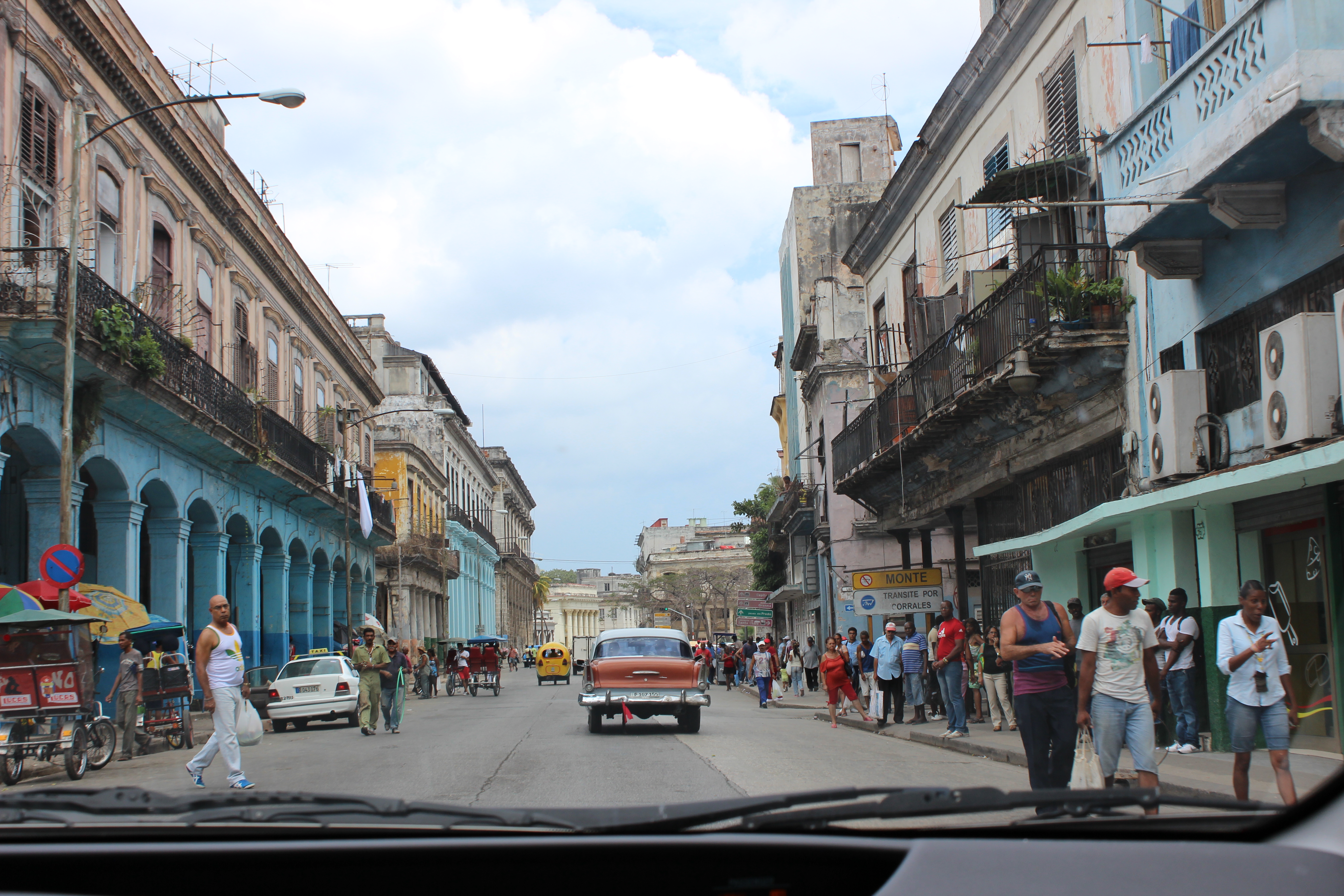 After filling out an arrival card and getting my passport stamped by a grim young female customs official, I left the small sunlit arrivals room with its huge tarmac-facing windows and entered the gloom of the dimly lit baggage claim area.

The gray light cast by the single light fixture in the baggage claim only made the walls, the fading posters, and the cracked tiles in the floor all look like a hospital in some forgotten tropical country. We waited by the one working baggage claim carousel as it creaked round and round.

Capitalism is highly illuminated—it takes money to be brightly lit.

Emerging into the bright daylight and crush of eager families shouting for their loved ones, I blinked, then scanned for my driver, David.

One of the benefits of having the U.S. Coast Guard liaison as my official sponsor for my two-week trip is that I could travel alone throughout the country without an official escort of any kind. However, I arrived when Ed and his wife, Amy, were on a road trip exploring the eastern part of Cuba.

The last time I saw Ed in person was in 1997. I’d never met his wife or daughters. And now, here I was, in Cuba and they weren’t going to be home until the day after I arrived.

Ed had assured me he would send me a Cuban young man he used as a driver for his entire family, David. As I searched the crowd I was picturing an older man for some reason. Then I saw a serious, rotund, young man in a T shirt and athletic pants who asked me if I was Iris Gonzalez. As I made my way past the crush of families, young David led me to Ed’s Toyota Prius for the ride to Ed’s home.

Cuba. I was in Cuba now, the Cuba of my imagination, of the countless stories I had heard growing up from everyone related to me.

The crowd at the arrivals area was overwhelming in size and volume. The family reunions on the narrow sidewalk spilled onto the roadway blocking the way for the few vehicles leaving the airport. The crumbling concrete everywhere looked so dingy in the tropical brightness.

And the noise, so much Cuban noise! I grew up with the loudness but it had been so long since I was deafened by the cacophony of Cubans, I was stunned for a moment.

David saw me looking and wasted no time in breaking the silence as he drove.

“Bueno, that’s because after 9/11 security at U.S. airports stop you from going to the gate to say goodbye to your family or to greet them when they come home,” I tried to explain. “Besides, especially for someone like Ed, when you travel and go to the airport often, it’s no big deal.”

As soon as it slipped out, I immediately regretted it. My defensiveness was the confirmation of how easily Americans can travel anywhere, an ease that is foreign to most Cubans.

Here I was, the American visiting Cuba. It didn’t matter that I was raised by Cubans. I grew up an American. I was one of them, un Yanqui.

For a Cuban to travel the first challenge would be to secure an exit visa. Then the problem becomes one of money and how to pay for the airfare. In a country where the top salary was capped at $20 US, airfare, visa fees, airport taxes, let alone the other associated costs of travel, traveling anywhere was out of reach for many Cubans.

I kept quiet and focused on the drive through the edges of Havana. The sky had been darkening quickly since we left the airport.

David drove along Quinta Avenida, or Fifth Avenue, a well-paved road that paralleled Havana’s famous Malecon, the seawall that forms a long edge for the ocean-facing Havana. It was the middle of a warm Sunday April afternoon, yet there was little traffic on Quinta Avenida.

As David drove, we eventually left the ocean going through the neighborhoods fanning out from central Havana. It was all so fast to take in at once—the large crumbling once-grand houses facing the wide avenue. The palm trees and green vines. The emptiness of this major street in Cuba’s capitol.

Rain suddenly began pouring down in sheets and David slowed the Prius behind the vintage Chevy ahead of us.

Luckily, both drivers had spotted the pedestrians attempting their death crossing and had slowed down even more. The Chevy stopped while the woman was helped up and the group finished running across the broad avenue.

Nowhere had I spotted a single crosswalk or pedestrian crossing of any kind.

“Drivers here are more afraid of hitting people not just because of the police, but because hitting a body can really damage an old car,” David casually said. “And how can you fix major damage from that?”

With that simple introduction to traffic Cuban style, David turned down a side street into a neighborhood and drove up to the locked gate of the official U.S. Coast Guard liaison’s home, my home base for the next two weeks. 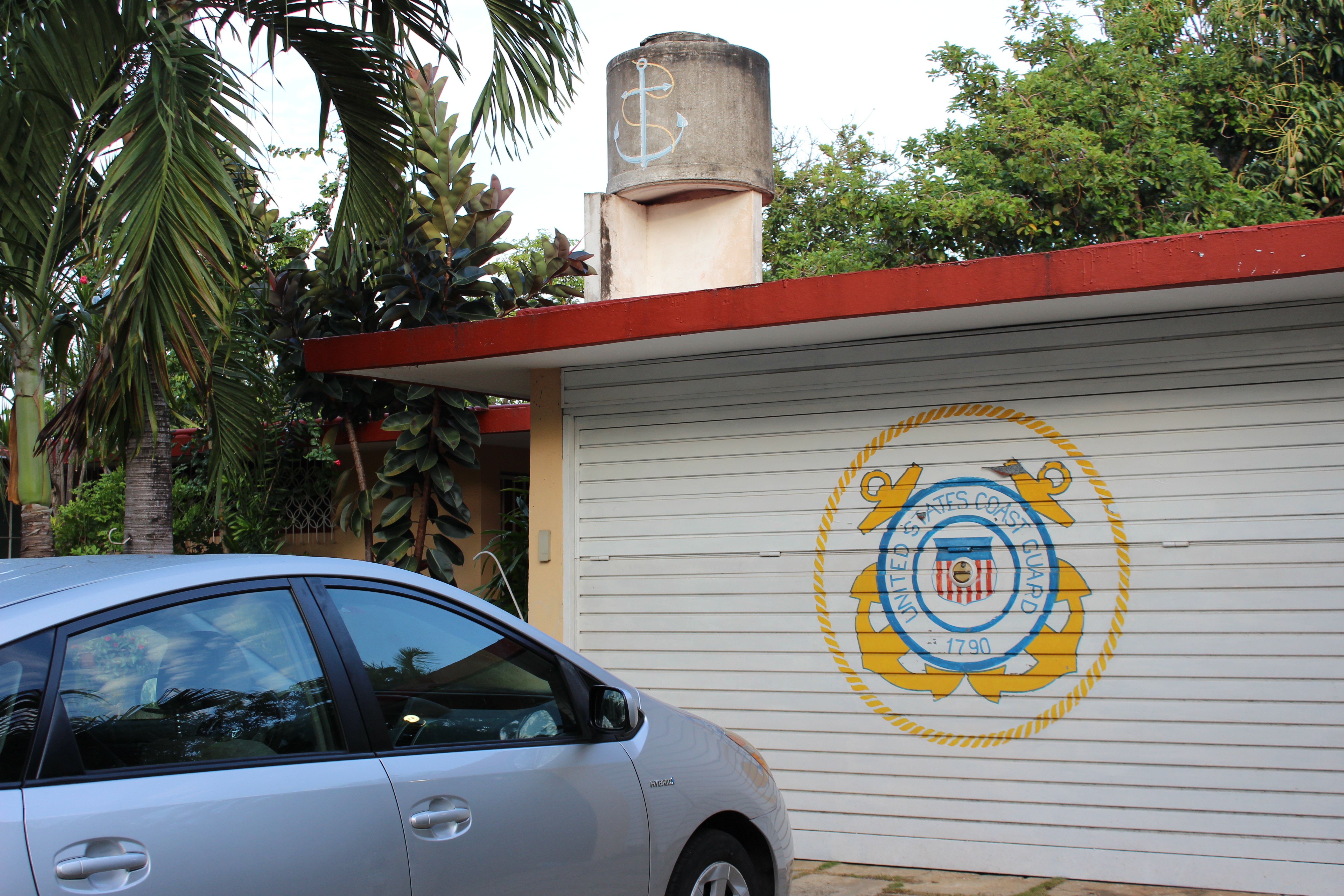 Featured image is a street view of Old Havana while being driven in Ed’s Prius. Photo taken by Iris Gonzalez.

One thought on “Driving Ms. Americana”