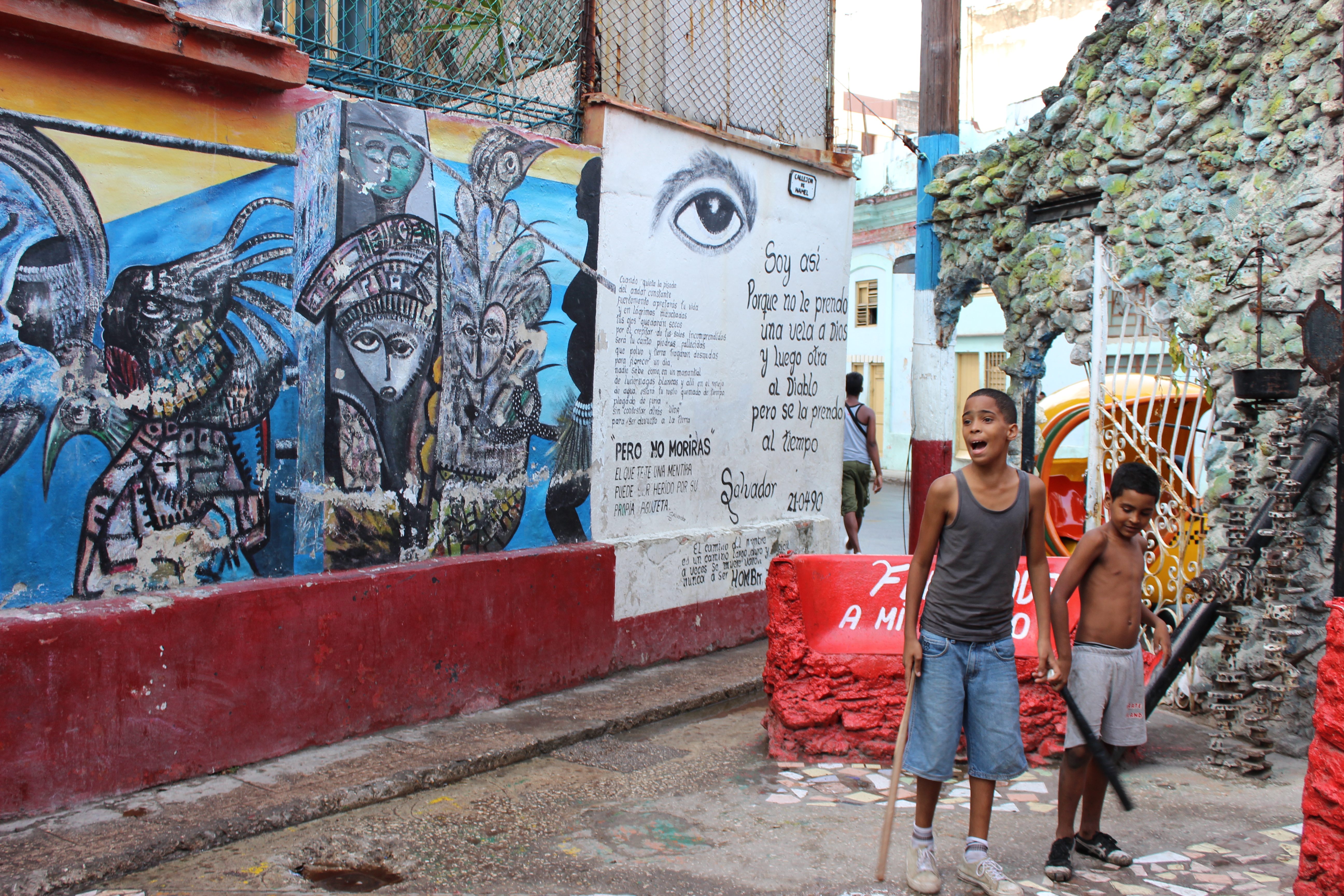 Although my plane took off at 2 p.m. from Tampa, I feel like I’ve traveled a million miles and almost 60 years and it’s not even dark yet in the Miramar neighborhood west of Old Havana.

My luggage sits inside the official residence of the U.S. Coast Guard liaison, my friend Ed Porner. The house sits directly across from an elementary school on a corner verdant lot, the one story home nestled under coconut palms that shelter the gated property in this upscale Cuban residential neighborhood.

I am hungry and alone in the house. Well, not exactly alone.

Ed’s driver, David (I’ve changed his name), is a rotund 29-year old single guy who dropped out of school after finishing the eighth grade.  He learned how to drive first by washing cars, then by starting them. David graduated to moving the washed cars from one spot to another and over time gained enough confidence to learn how to drive other people’s cars more than a few feet.

But he’s waiting for me now. Although David doesn’t say anything when I ask about going to a place to eat, I invite him to join me for a late lunch on my tab.

Unable to use credit cards while in Cuba, I leave behind the money belt holding the cash for my two weeks in Cuba. Some of those euros will get changed into the tourist currency I’ll use over the next several days.

One of the consequences of the decades-long U.S. embargo still in place today is that U.S. citizens are not allowed to spend money in Cuba. Inadvertently use your U.S. credit card in Cuba somehow and the U.S. government could freeze your assets until you petition the government to release them.

For Canadians or other foreign tourists, the general lack of credit card technology across Cuba still means cash is king. While the Cuban national currency is the Cuban peso (CUP), tourists use the Cuban convertible peso (CUC). Both are legal tender on the island, though neither is exchangeable in foreign markets. The CUC (pronounced “cuk”) is pegged to the U.S. dollar and worth 25 times as much as the comparatively worthless CUP.

Credit card use is spotty at best in the capitol and there are no ATMs in sight.

We park near the center of Old Havana at the Melia Habana, a Spanish-owned, high-end tourist hotel where I go inside to change euros into CUCs.

David takes advantage of the hotel’s WiFi to browse the internet on his cellphone.

Our next stop is at the open-air restaurant El Aljibe, located in a nearby residential neighborhood of Miramar. 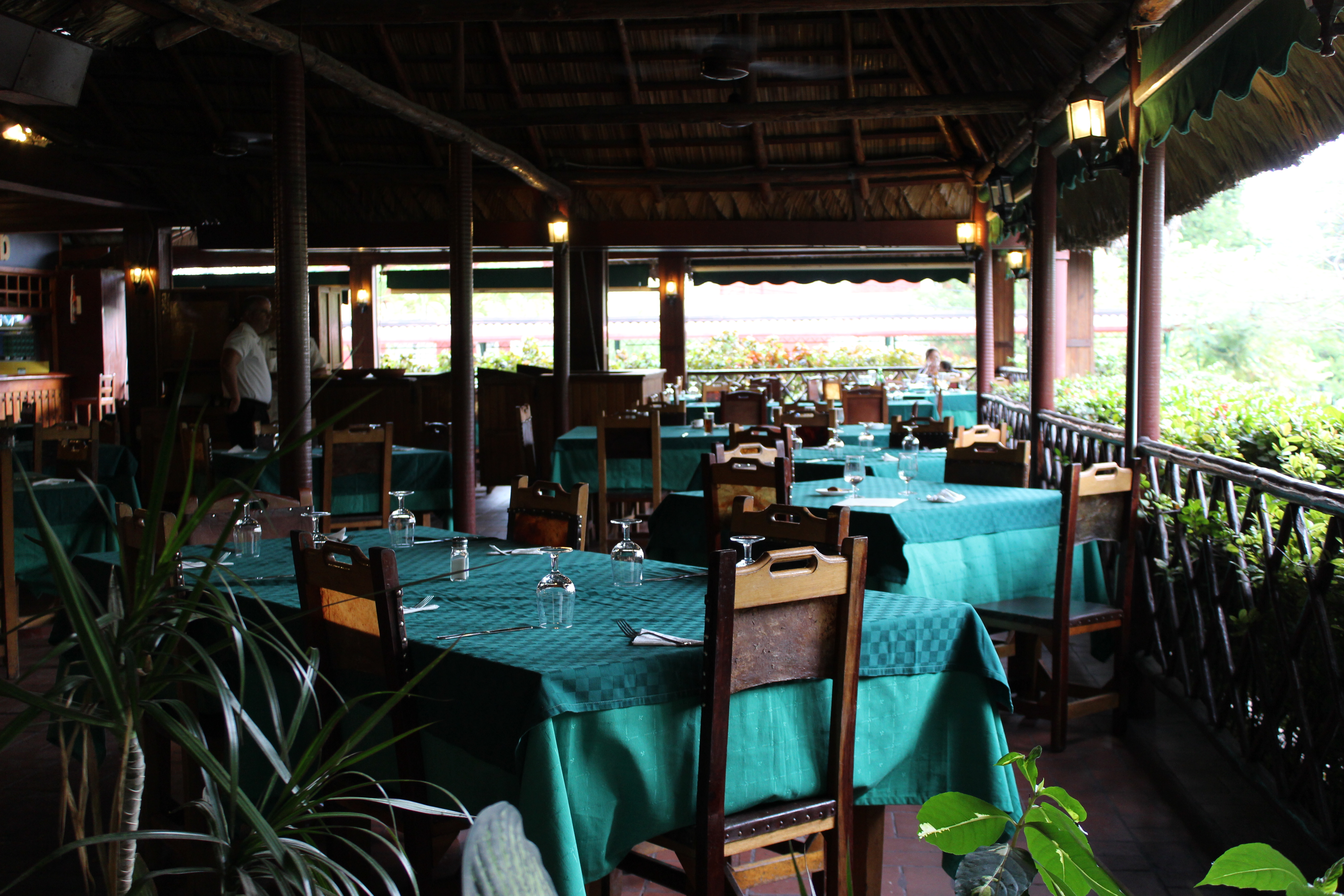 David joins me for my first Cuban meal. This will become a familiar pattern. The young man will eat food that is offered no matter when or where, as long as he is invited and someone else pays for his meals. He orders exactly the same meal that I order—roasted chicken, black beans and rice, and flan—and leaves nothing behind.

“The black beans here are the best,” David mumbles in between bites, busy shoveling food onto his fork with a piece of Cuban bread.

The Cuban bread tastes faintly of wheat flour. The beans are bland, with only the slightest hint of bay leaf and nothing else. At only 29 years old, David would have no experience eating the well seasoned Cuban black beans most emigres come to expect.

(You can try making Cuban black beans at home using this traditional recipe.) 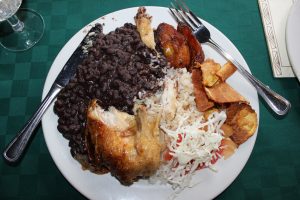 My first Cuban meal was the classic roast chicken in sour orange sauce with black beans and rice at El Aljibe.

Spoiler alert: Over the next 12 days, I learn to stop ordering black beans, as they tend to be diluted to a joyless gray-black broth with few beans. David was right—El Aljibe’s beans are the best available.

Any opportunity to absorb the experience ends once David calls over the head server and tells him I am writing a book about Cuban food.

This is the cover story I repeat at every stop during my two-week trip.

I am a first generation Cuban American visiting the land of my family. Yes, I am here without my family or any relatives. No, my parents are deceased and I have no contact with relatives still in Cuba, most of them are in the U.S. Please tell me about your Cuban cooking preferences. What are your favorite foods to cook?

I am genuinely interested in possibly writing a book about regional cooking styles in Cuba, so I come prepared to take cooking notes and photos.

I learn that Sergio Garcia and his older brother, Pepe, (now both in their 80s), opened Rancho Luna in 1947 which was located in the then-countryside west of Havana. Soon after the 1959 revolution, the restaurant closed down. In 1993, the state asked Sergio if he would revive Rancho Luna, opening it under its new name, El Aljibe.

The palapa-style building now hosts busloads of foreign tourists. The full meal comes to $12 CUC, not including the watery, eggy Cuban flan I taste, but mostly leave uneaten.

David finishes my flan. We leave with my new restaurant cookbook under my arm.

Our next stop is Callejon Hammel, a long alley lined with found art. The narrow two-block long alley between Aramburu and Hospital streets in Centro Habana features many images from the Afro-Cuban religion of Santería. Almost all the art is the vision of one man, Salvador Gonzáles.

“Too bad you landed in the middle of the afternoon,” David said. “They have live music and rumba dancing every Sunday at noon.” 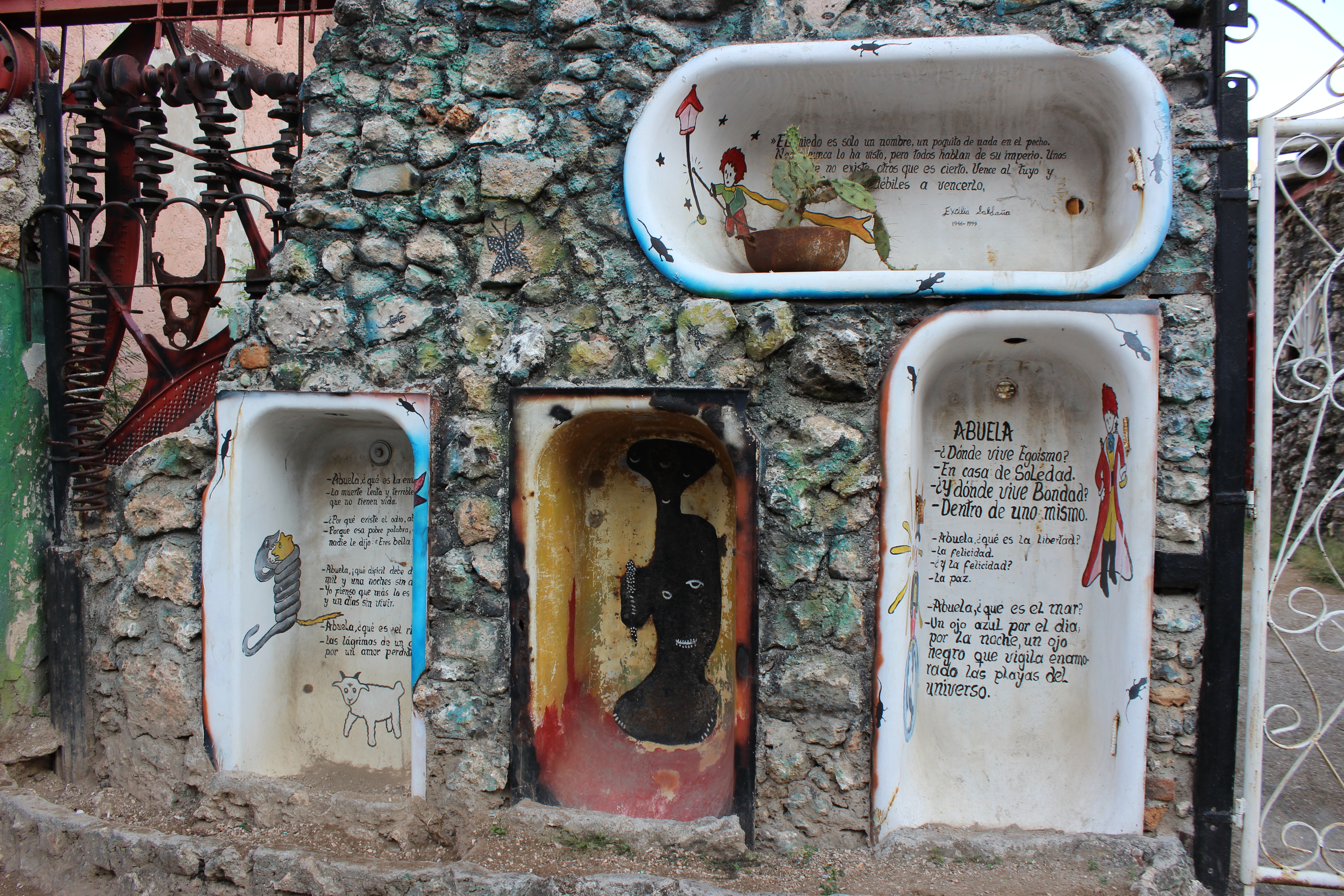 House paint and bathtubs, iron parts, and discarded industrial pieces have been transformed into vivid murals and sculptures, all of it surrealistic street art. The colors used represent various Santería deities. 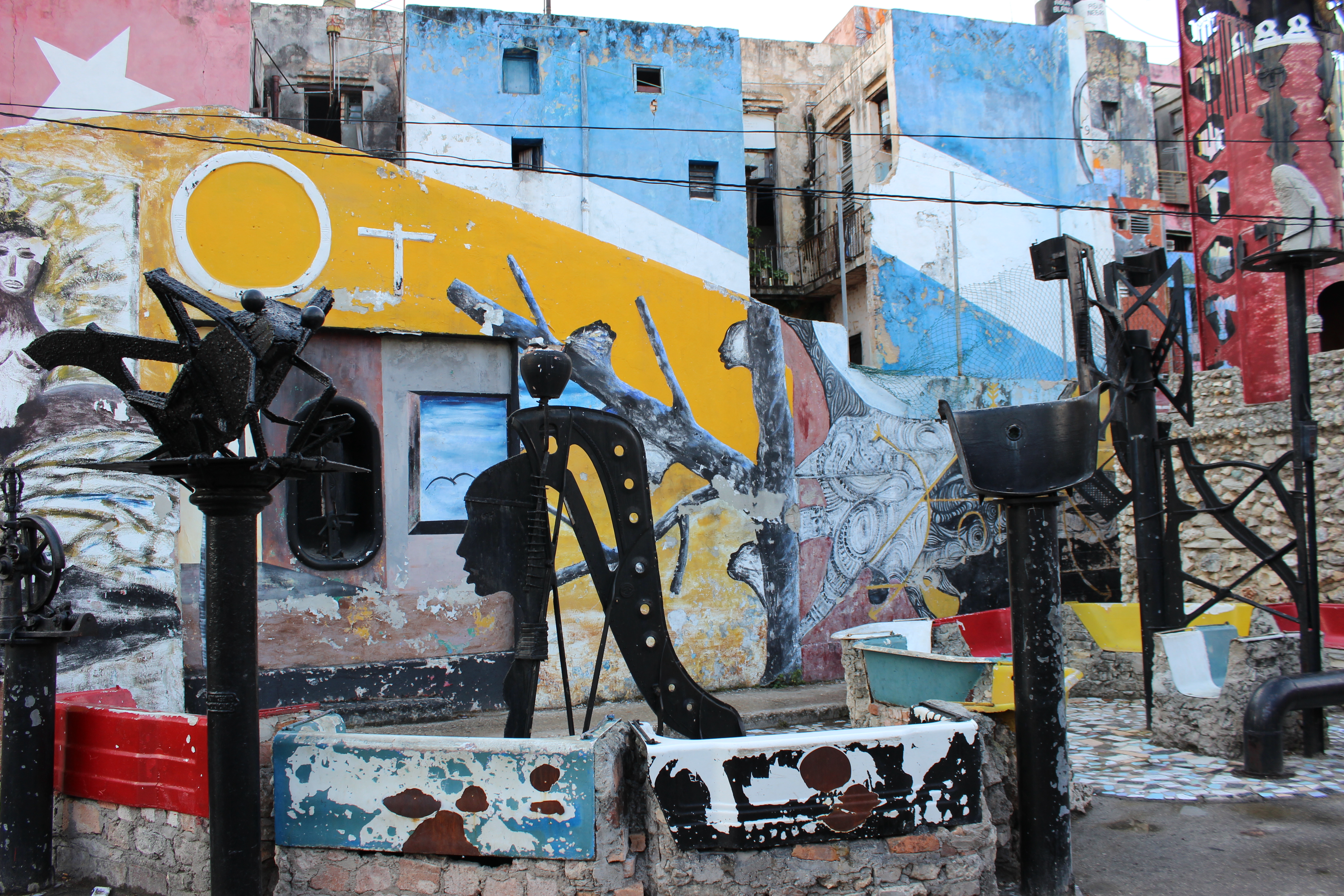 Inside a bar in Callejon Hammel. 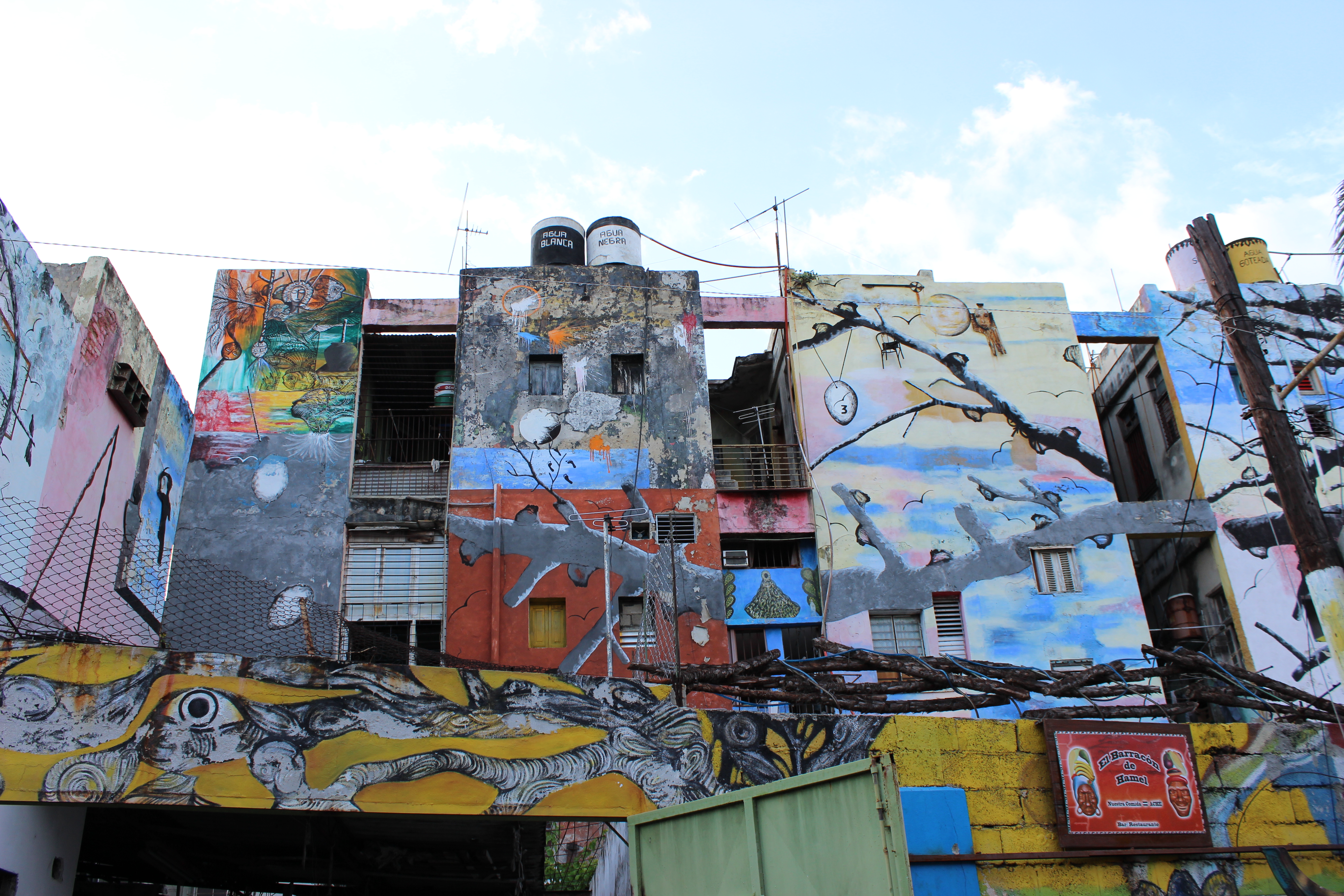 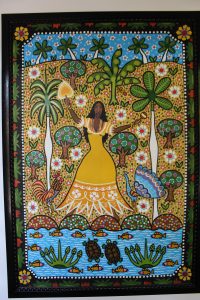 Large painting of Ochun, the Yoruba goddess of rivers, at Callejon Hammel.

Blue honors Yemaya, the Yoruba Orisha who rules the ocean, while yellow belongs to Ochun, her sister and goddess of fresh waters. Black and red represent Elegua, the trickster who opens and closes the paths for every person and endeavor.

Images from the rest of the late afternoon and evening smear into each other like Vaseline on eyeglasses. David drives me past plazas, churches, buildings barely standing, and restored buildings that look untouched by time.

It was all such a blur, like some Twilight Zone movie studio lot where time has warped into multiple origami folds.

Standing outside the Bacardi headquarters building, it is so stunningly pristine the setting sun glints off the intricate window grills and copper façade covering most of the Art Deco building. Considered one of the finest Art Deco buildings in Latin America, its multiple windows of Tiffany glass are all intact. For a moment, one could imagine the pride of the Bacardi family in 1930 at its grand opening, admiring this work of beauty erected on the edge of Old Havana. 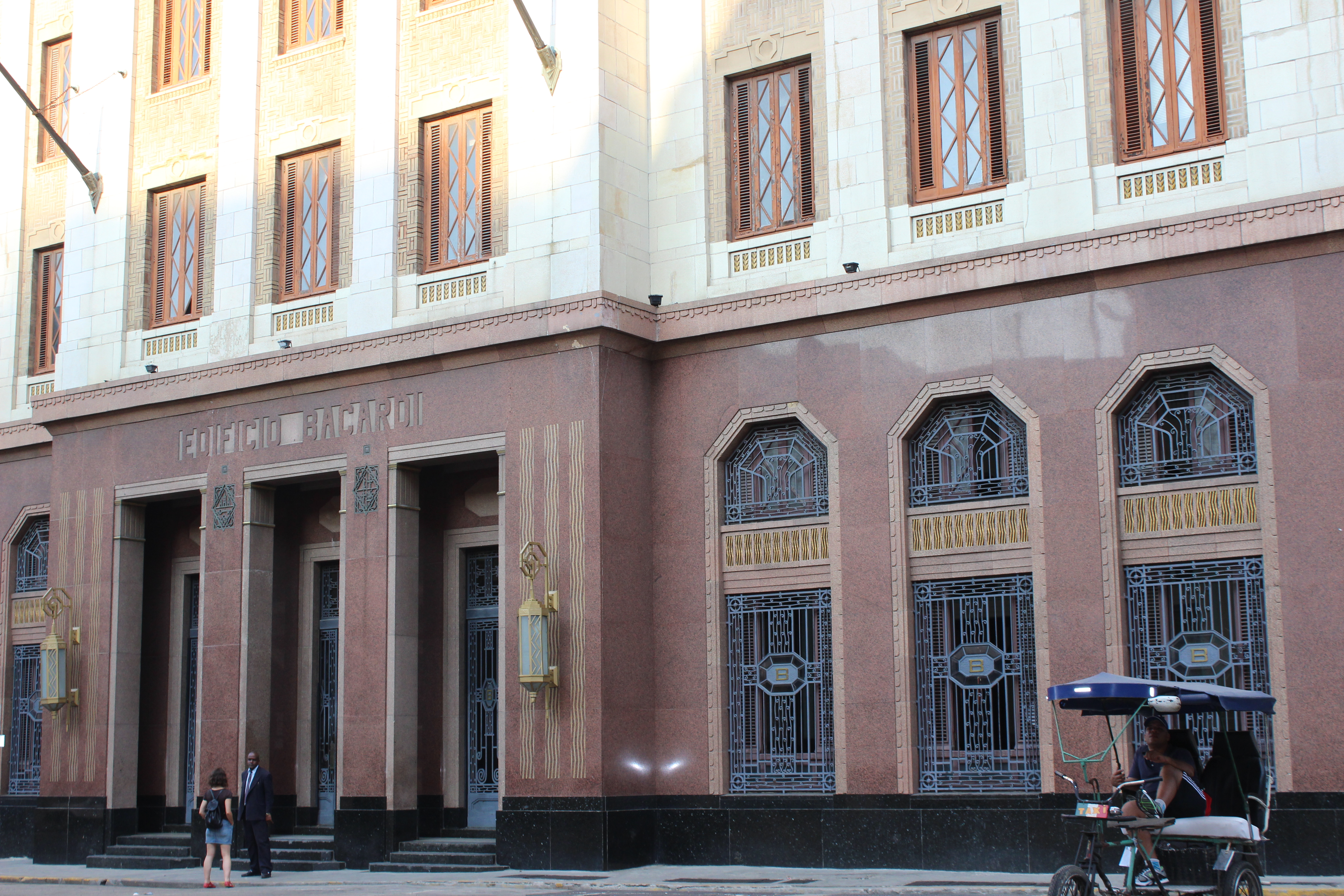 The finest example of Art Deco architecture in Latin America, the Bacardi headquarters building was erected in 1930.

Standing near this preserved landmark from Cuba’s past is David, texting his girlfriend when he thinks he’ll be dropping me off at Ed’s house. The Bacardi family owners are nowhere to be found, fleeing Cuba once the newly installed revolutionary government confiscated their business assets in 1960, including the head-turning headquarters.

Present and past co-mingle everywhere in the capitol. We wait in the little traffic there is by the Hotel Telegrafo behind two vintage American cars. The restored hotel and cars bring back that too-medicated hazy feeling of watching an old movie on a sick day. 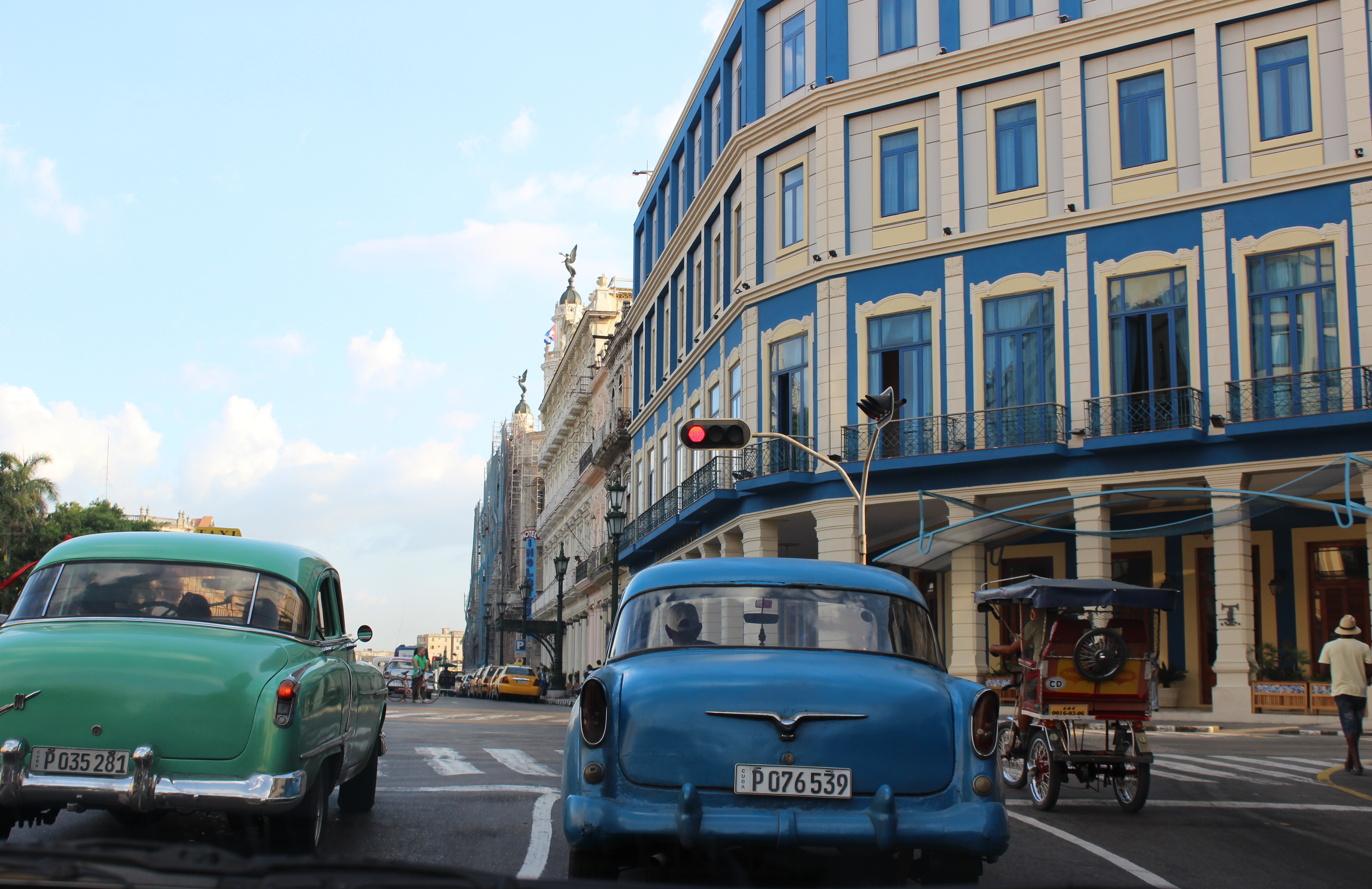 Vintage American cars and a pedicab wait for the traffic light to change by the restored Hotel del Telegrafo in Havana, Cuba.

Just then, a “coconut cab” goes past us. An open eggshell of a motorized moped, the half-coconut shaped cab can carry 2 to 3 people, depending on weight and the familiarity of the passengers. 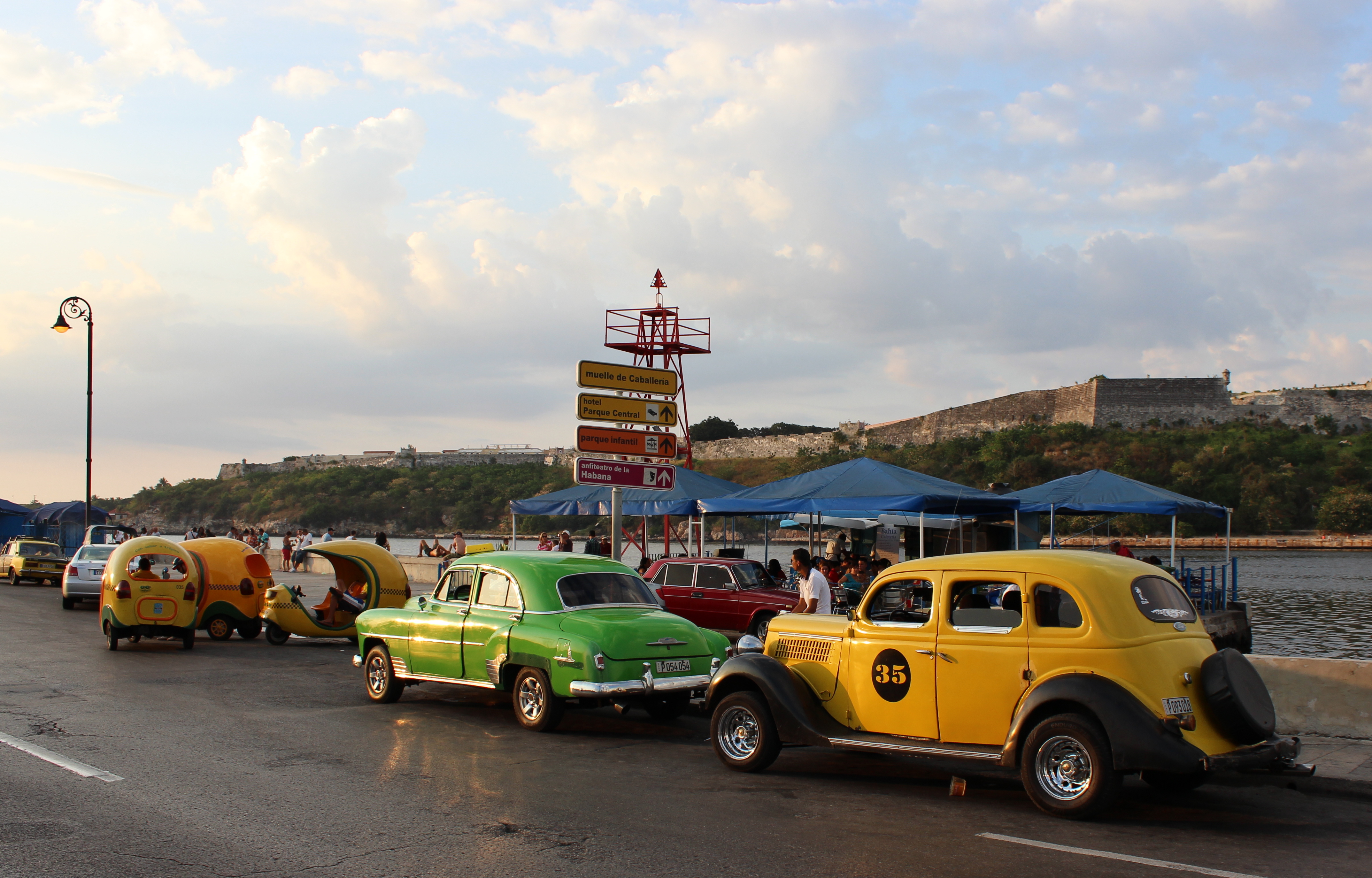 Coconut cabs and vintage cars for hire wait for passengers.

“Those are unsafe, they tip over all the time, but they’re cheaper than a taxi cab that has four wheels and a proper car motor,” David said.

Ending my first day on island back at Ed’s house, I speak briefly to him by cellphone as he and his wife are driving back to Havana from a road trip in Cuba’s countryside. Ed gives me the rundown on the security at his official residence.

“They watch you from the school across the street so don’t freak out, just close the blinds, and don’t walk around naked for heaven’s sake,” Ed tells me.

“They” are the Cuba’s KGB-schooled security services. The Cuban intelligence agencies, the Dirección General de Inteligencia (DGI), keeps an eye on foreigners, especially Americans of interest.

Ed is an American of interest. For the next two weeks, so am I.

I am locked into Ed’s house for the night. Should I leave the outside enclosure door unlocked, I am warned the security guard who will patrol the grounds in the middle of the night will take great pleasure in waking me up at 2 a.m. to scold me about it.

“Don’t go all ninja on the spooky guy outside at night, he’s the security guy,” Ed reminds me.

Tomorrow morning, David will arrive about the same time the household maid arrives in the morning, and my first full day in Havana will begin.

It takes over a slow hour to log in to my Gmail account on Ed’s computer. It takes that long to upload two photos to attach to the email I’ve composed letting family and friends know that I’ve arrived safely.

“We’ve got the best service on the island,” Ed told me. Not knowing any better, I soon learn he is of course, correct.

2 thoughts on “Black Beans and Being Watched”