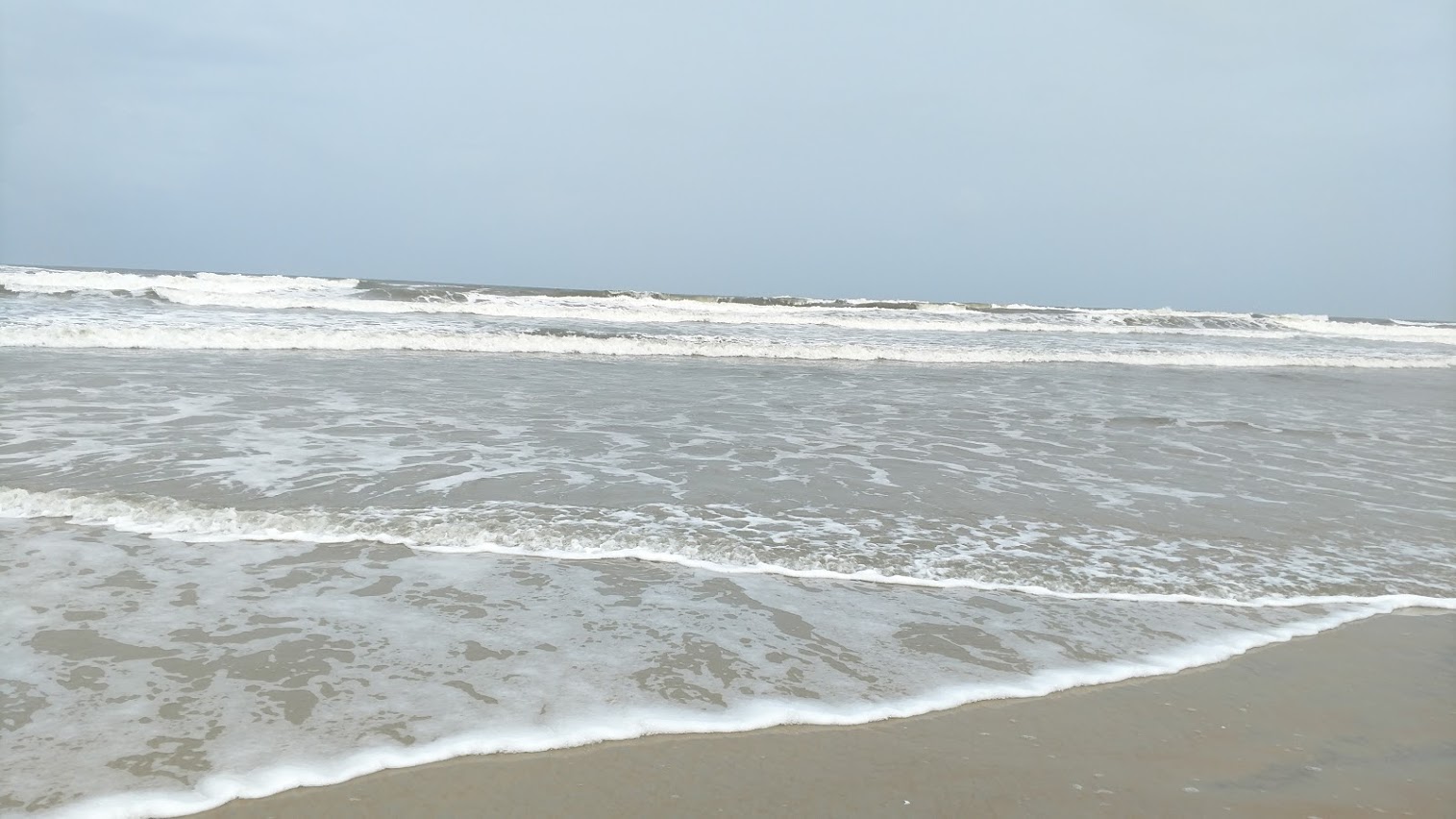 Satisfying travel experiences do not insulate you from the world — they expand it so it’s as endless as the sea.

Now that I’m back in the U.S. what impressions did India make on me?

It is a complex, mysterious place I was fortunate enough to experience while staying with an Indian family. That meant I always had locals who could provide answers to my many questions.

Staying with a well-off family, it was a bit odd for me to get used to the idea of servants. At first the cook, Renuka, would stare at me from the kitchen to see if I needed anything which I found unnerving.

I quickly warmed up to Renuka’s bright smiles as she brought me a cup of perfectly made masala chai tea. I even was able to make the somber and silent maid Nagamani smile easily by the time I left. They were shy around me at first and turned their backs whenever I tried to take a photo.

However, they both got used to me and learned my preferences and routines.

Nagamani knew I’d be up first, at my laptop at the dining table. Once everyone was awake triggering too many happy interruptions she learned I would put everything away by mid-morning so she could then clean the dining table last. Renuka quickly understood I would always enjoy a second cup of masala chai in the morning and would offer me the second cup as soon as she saw I was ready for more. 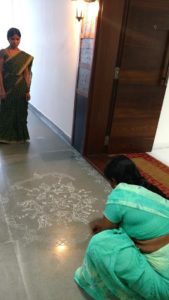 Despite the lack of a common language I found myself enjoying their presence and learning from them on a daily basis. They even called me over so that I could watch (and capture) Renuka create the elaborate muggu design at the entrance of Ram and Sue’s condo. This they knew I’d be interested in from watching me spy from the utility balcony off the wet kitchen on the neighbor across the street as she did the one for their home.

I also now know what it feels like to be a child cared for by an attentive parent. It is so lovely.

Did I want some coconut water? If I said yes, moments later Renuka would bring me a fresh glass of it taken from one of the coconuts in the wet kitchen. What would I like for breakfast today? Renuka would make it and bring it to me with her genuine smile.

As for driving, I did not miss the need to navigate, watch for traffic hazards, and look for parking. Having a driver allowed me the luxury to notice quite a bit on our many road trips.

The Indians drive like they queue – haphazardly, filling every nook and cranny to angle closest to whatever is perceived as the front of the line. There were times when I sat up front that I closed my eyes because we would be so close to another vehicle I could have easily touched the car, truck, or bus next to us.

Despite the corpuscle-like surging of traffic, I only witness one accident, so minor there is no damage. People tend to drive slowly, since many of the roads are in rough shape.

I see entire families on scooters. My very first drive home from the airport I spot a mother holding a baby, with two small boys, and dad driving the motor scooter.

We drive through the chaotic Charminar market in the old Muslim sector of Hyderabad, dodging pedestrians, other cars, scooters, and dogs.

I saw on different occasions this scenario play out. There’s always two men on a scooter, the driver and the one in back carrying anything from an upright metal twin bed frame, a glass-less window frame, a metal footlocker truck, a kitchen cabinet, a Costco sized package of goods, and more. I also saw several times different motor bike drivers driving a scooter with both hands, cellphone anchored between ear and shoulder. Really?

Everywhere you looked, both pedestrians and drivers were mostly male. The women I did see were either with their families or with other women. The few solitary females I saw walking were usually walking briskly, not strolling leisurely.

I only counted five female drivers in all the car trips we took over two full weeks. Of those, all were young (as in unmarried and probably students), driving motor scooters, and alone (i.e., no one else riding with them). I never witnessed a woman driving a car, truck, or other heavy vehicle. I also never saw anyone use a child or baby safety seat. Women held babies in their arms and bounced squirmy toddlers on their laps.

As for the food, oh how I miss the food! The endless variations on grains, vegetables, dairy products and spices were wonderfully overwhelming with their many tantalizing choices. I tried to taste a little of everything and simply could not succeed as it would have resulted in serious overeating. 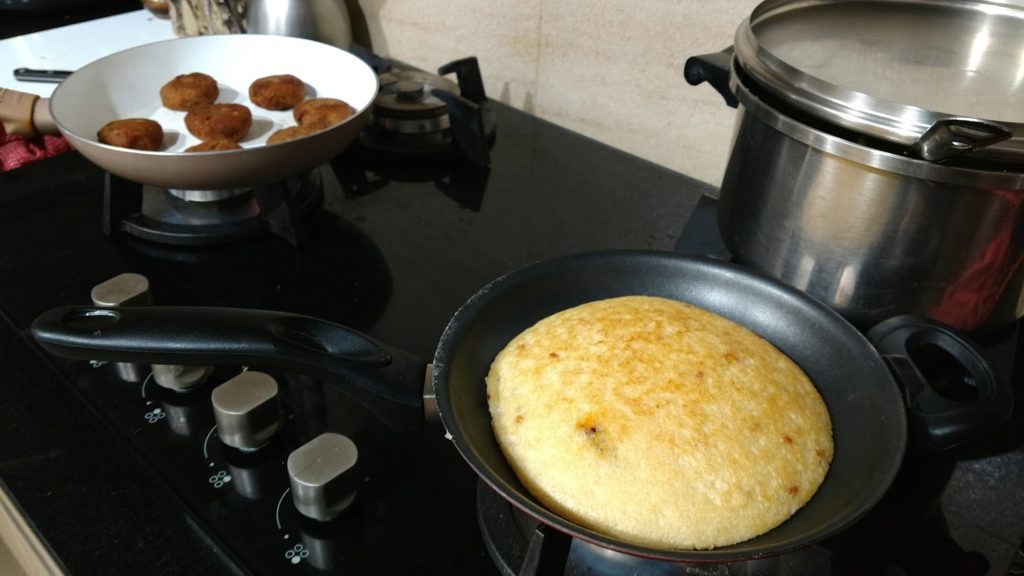 Idli (rice based dish in the pan) and lentil patties provide vegetarian options for guests. 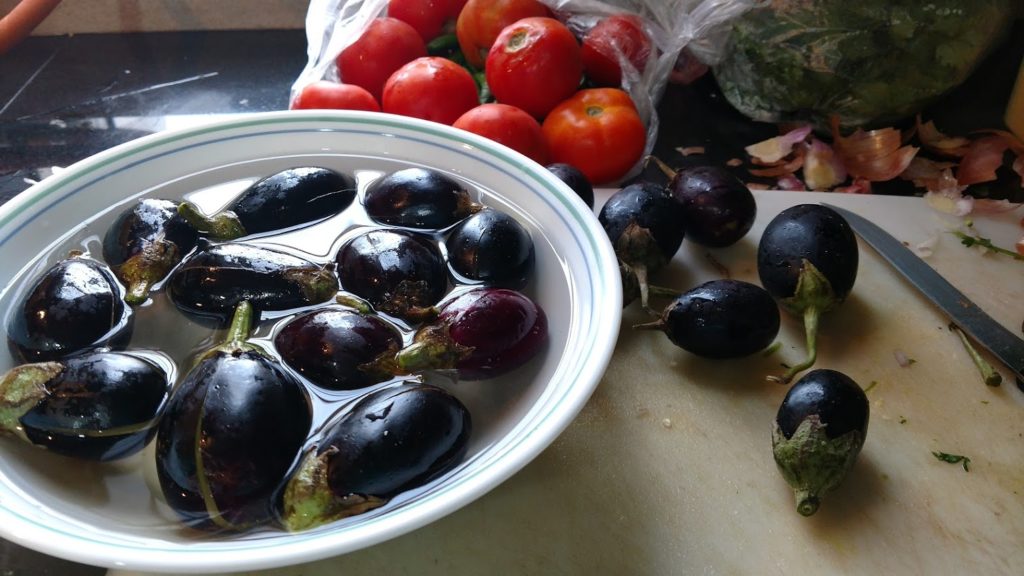 Eggplants and tomatoes are prepared for the evening’s meal. 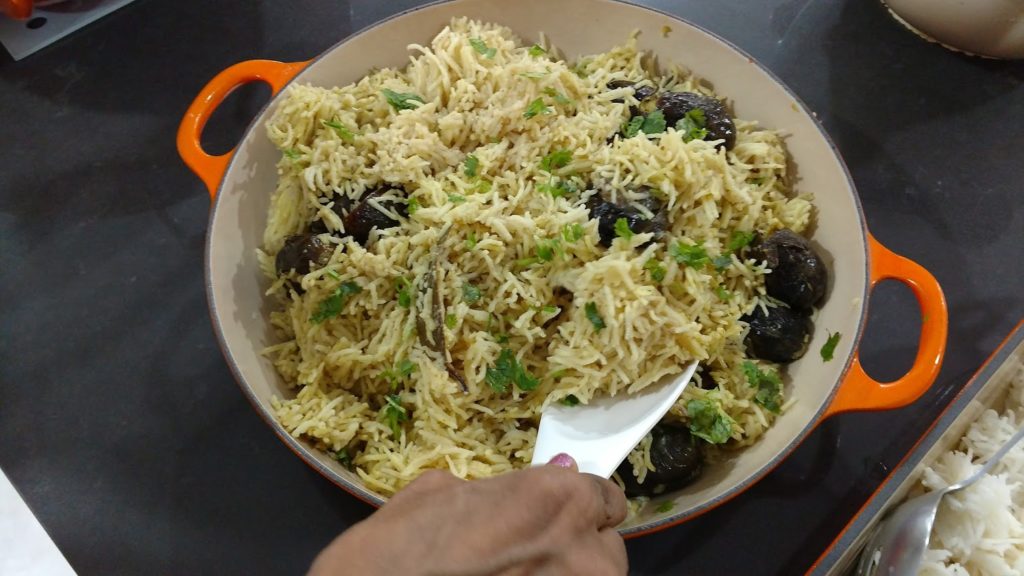 This was a delicate eggplant biryani rice dish I adored.

I also came to love Ram’s homemade yogurt—the best I have ever tasted, easily. I miss yogurt rice, baked yogurt, coconut yogurt made with fresh young coconut meat, thinner yogurt for lassis and thick yogurt to spoon on your dinner plate.

The fruit, from jack fruit to young coconut and varieties of mango luscious in their citrusy juiciness all tasted wonderful alone and with yogurt.

Eve tempted Adam with an Indian mango, of this I am certain.

I yearned to speak Hindi or Telugu. The sing song cadence of language interwoven with Indian accented English sounded musical to me. My plain English was boring by comparison.

Body language fascinated me. I quickly understood the slight side-to-side waggle of the head while speaking as the Indian equivalent of shrugging one’s shoulders when one is uncertain.

Most of the time I wore long pants, a long skirt, or a dress that came to just below my knees. Everywhere I went I was the only white woman and usually one of a few women in Western clothing. The women wore indigenous dress, whether it was the Indian sari or ‎salwar kameez, or the black chador and face veils of Muslim women. 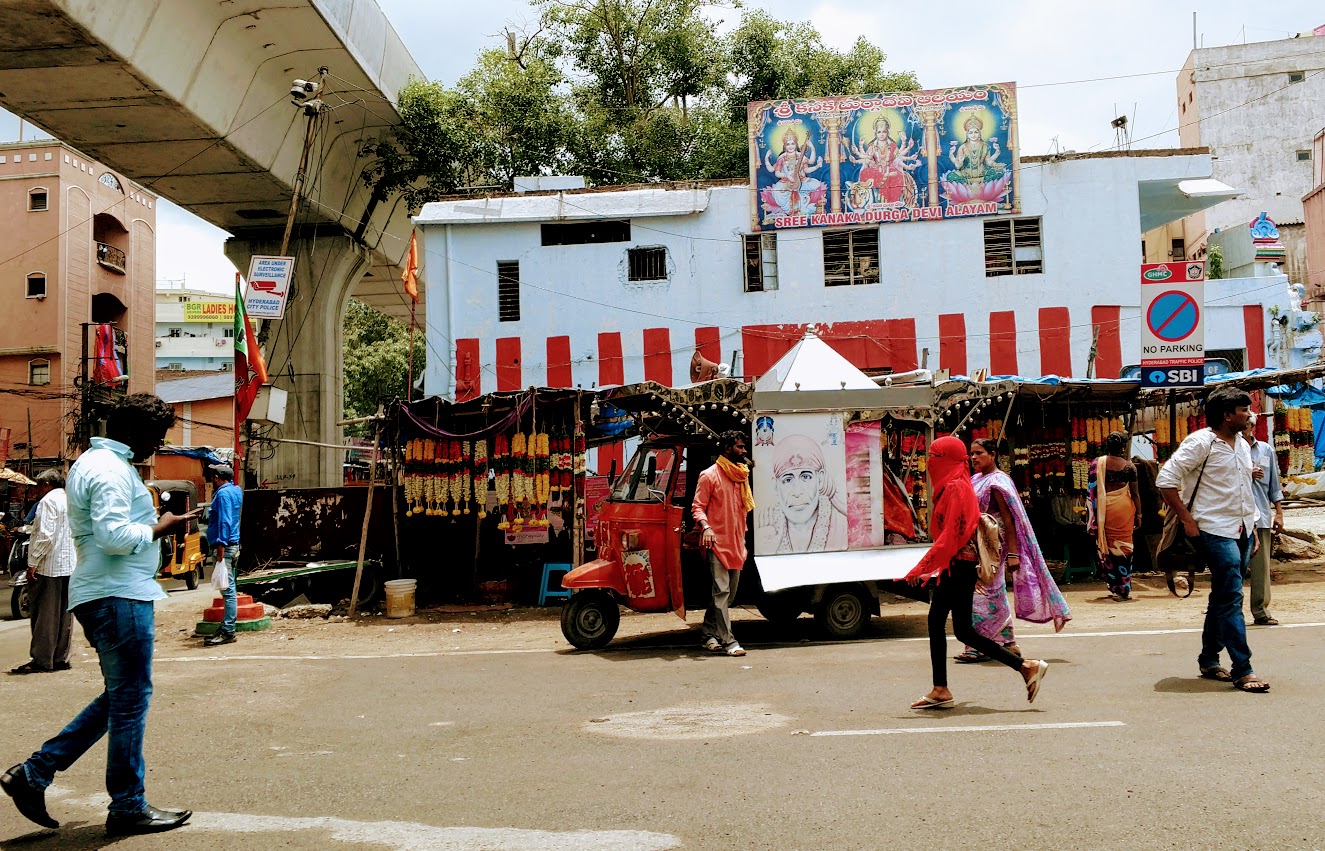 The roaming temple scooter is in front of a flower garland vendor. On the right you’ll see both an Indian woman wearing a sari and a second young woman wearing Western dress and a full face veil.

Only in Goa did I wear long baggy shorts (once) to ride elephants. The other time I deviated from modest dress was when I wore a casual jean skirt that came to just above my knees.

That was the time I was touring Old Goa. While walking around the grounds of an old church I was surrounded by a group of Malaysian men who motioned their cell phone to me. I thought they wanted me to take their photo, but no, their selfie stick quickly came out.

Somewhere in Southeast Asia, some men are showing off their group photo with a white Western woman in a “short” skirt.

Many of our days were opportunistic, taking advantage of invitations to visit family or friends, or running into people and stopping to chat, while enjoying some masala chai or filter coffee.

I notice the broken streets, the lack of sidewalks, the dirt and filth, and yet I also see women washing the steps in front of their businesses and homes, patches of carefully tended greenery contrasting against the garbage in the streets.

India, your contradictions of clean and unclean, modern and ancient, modesty and interesting approaches to a full body massage, are both intriguing and confounding.

What I shall miss the most are the smiles, the spontaneous conversations, the unplanned moments of connecting with others, bustling life with all its flavors.

If you ever have the opportunity to visit India with locals, please go. I promise you it will never, ever be boring.

4 thoughts on “Final Impressions of India”